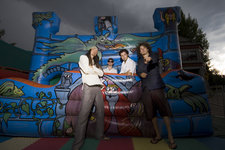 Jamband from Whistler BC
http://myspace.com/thereleasejamband
Broken Up - Confirmed: Apr. 15, 2014 (Archived)

Brendan Ladner
thereleaseband@gmail.com
604-938-1787
Contact Info
Past Shows (4)
Coming off another successful BC tour, including a headlining spot at Bonfire Festival 2009, The Release is gearing up for a cross Canada tour through the fall of 2009. Based out of Whistler BC, The Release is bringing the high mountain vibes to the rest of Canada.

Playing grooves to warm the soul, The Release performs all original music. “While we know covers would be a successful avenue, our heart lies in our original music”, says Brendan Ladner guitarist/vocalist for The Release. Knowing no bounds, The Release incorporates drum n bass, sax, flute, keys, guitar and luscious vocal harmonies. “We go everywhere from Phish, to Maceo, to elctronica dance music and Wilco,” says keys/flute/sax/vocalist Tom Heuckendorff.

Having met onstage with Kostaman and the Vibrations, Brendan and Tom shared an instant jamband connection. Before long they were doing guitar/flute jams all over the place, getting to know each others songs. Within weeks they were playing outdoor gigs around Whistler. In a recent turn of events, Kostaman himself is now playing bass in The Release. Bringing his years of live and touring experience, Kostas has added strength and feel to the grooves, while lifting the dance jams to the next dimension.

The Release is a jamband, playing original funky jamrock. There is no genre that is taboo, while improvised jams are excpected. In order to execute such a diverse range of music, a master drummer is required. The Release has enlisted the skills of Victoria drum wiz, Tim Watson. With such a talented and experienced lineup it is no wonder that audience members are left with smiles in their souls.

“We strive to make good, honest, original music. We couldn’t be more open than at our live shows,” explains Brendan, “we share the energy with the crowd, so it’s up them what kind of improv jams – funk, rock, electronica, psychedlia - we’re going to play.”

There are a lot of bands that pass through town, none of them are making music like The Release, guaranteed.

The Release is sometimes seen playing live dub music, in an alter-ego known as the Kostaman Dub Squad, which can be heard at myspace.com/kostaman123
No audio samples have been linked to this profile.