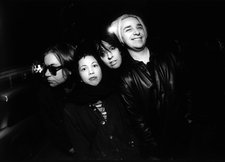 You can spot a member of Thee Emergency a mile away. Maybe it’s the furry foursome’s bodacious hair-dos, or the swagger in their step, but most likely it’s that they seem to be having so much more god damned fun than the rest of us. Their live shows offer a frenzy of rock’n’roll with amp-bursting guitar solos, soul grabbing vocals, all mixed with a dash of psychedelia and a hint of heavy soul.

The band’s first full length album, Can You Dig It? (2006) was produced by acclaimed Detroit producer Jim Diamond (The Dirtbombs, The Mooney Suzuki, The White Stripes). Ever the rebels, Thee Emergency took their second full length release into their own hands. SOLID (2008) soon became an instant classic including tracks that ranged from down tempo ditties to gut wrenching rock-outs.

In the summer of 2008, with the help of long time friend and fellow crazy heart Phillip Peterson, Thee Emergency were able to craft an album that is both silver and gold, high and low, country and psychedelic. Cracka’ Slang, due out in March of 2010, is Thee Emergency through the looking glass. This year the close knit quartet are heading back into the studio to record their 4th full length record Death to Disco, returning to their heavy rock roots with the highly anticipated release, available in fall 2010.
No audio samples have been linked to this profile.
No member roster has been entered (to link to musician profiles.)
Status: Unknown
- Last confirmed Jul. 27, 2011
Submit info on this band to our admins