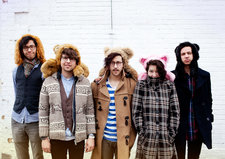 Matthew Mazankowski
behindsapphire@gmail.com
604-612-4448
Contact Info
Past Shows (20)
It is fitting that just seconds into Behind Sapphire’s eponymous record, guitarist Matthew Mazankowski utters that most sacred of musical tropes: “I’m free to make my noise,” he sings in the harmonized verse that leads off the album’s rootsy opening track, “The Call of the Wild.” As is the case with just about anyone that has employed the singer's greatest declaration, Behind Sapphire is unabashed in its embrace of musical freedom – be it merrymaking or noise-making, both.

After years of shuffling, tangling and realigning, the Vancouver-born band – Grant Cassell (vocals), Matthew Mazankowski (guitar), Steven Ward (drums), Lindsay Sjoberg (guitar) and Brayden Pichor (bass) – have formed a creative cauldron from which has emerged the release of their debut album in 2010, a spot in the Peak Performance Project’s Top 20 the same year, two cross-Canada tours including stops at festivals all over the country, and the Space Cadets – the band’s costumed street team which orbits their shows, occasionally touching down unannounced.

Recently, Behind Sapphire released a music video for "Oh My, What A Fine Day" featuring Twilight actress Jodelle Ferland before embarking on their "Oh My, What A Fine Tour" - a three month, cross-country adventure that brought the mythical world of their album to stage. Populated by beanstalks, tugboat towns, traffic jams, crazy critters, and yellow chalk fish, the album’s lyrical flights of fantasy capture the West Coast of the imagination – one half-lived and half-dreamed.

Behind Sapphire takes this make-believe to stage with a fantastically woven live show that spills over with quirky energy and intense celebration. The band seems nothing short of a feather, a megaphone, space-men, a pair of gumboots, or an entire orchestra in their ambition to captivate.

It is clear that Behind Sapphire is willing to reach deep into their own pockets of imagination to capture yours. They truly believe they are “free to make their noise” and invite the world to come make it with them.
No audio samples have been linked to this profile.