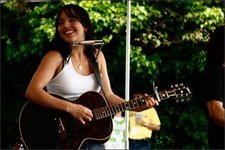 Citing her two biggest influences as Lucinda Wiliams and Neil Young, Kristen Ward's highly ambitious and successful DIY style reflects how influence and inspiration can coalesce into a greater creation. Drive Away was recorded in Seattle with her band of local musicians including Gary Westlake on guitars and mandolin and Kevin Suggs on pedal steel and Pearl Jam’s Mike McCready also contributes guitar to one song.
No audio samples have been linked to this profile.
No member roster has been entered (to link to musician profiles.)
Status: Unknown
- Last confirmed Jul. 10, 2009
Submit info on this band to our admins