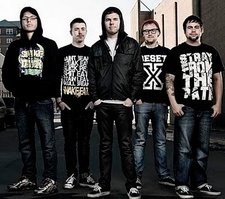 Stick To Your Guns

Stick To Your Guns is a 5 piece melodic hardcore band from Orange County, CA. The group began in the summer of 2003 when vocalist Jesse Barnett was inspired to form a band that would provide him with a medium to project his view points and reflect his musical influences. STYG blends melody, heaviness, and sincerity into one solid sound that will cater to fans of Comeback Kid, Throwdown, Ignite, and Rise Against.

When Ash Avildsen of Sumerian Records first noticed the band, he put them on as the opener for Ignite's Anaheim House of Blues show that did over 850 people. After the incredible response and passionate performance, he immediately signed the band for booking and the hype began to spread all of the country. STYG recently completed a Westcoast tour w/ Caliban and The Acacia Strain in October, as well as a 7 week co-headline tour in Nov/Dec w/ Too Pure to Die and As Blood Runs Black. STYG headlined all of the Texas and California shows with all of the turnouts being between 300 and 500 kids. STYG also holds the record for the highest attendance ever at the Chain Reaction in Anaheim, Orange County's premier all ages venue. Even before signing to Sumerian Records, the amount of momentum behind the band was so powerful that they were chosen to open the upcoming Terror tour in January/February 2007 that also features The Warriors and All Shall Perish.

STYG's diehard touring work ethic combined with their passionate and infectious live show will undoubtedly bring the band success and many exciting opportunities in 2007.
- Loudside.com
No audio samples have been linked to this profile.
No member roster has been entered (to link to musician profiles.)
Status: Unknown
- Last confirmed Jan. 17, 2011
Submit info on this band to our admins