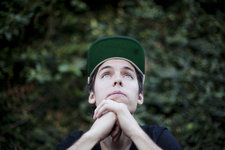 Since the release of his first full length album, Irreversible, Grieves has been called a breath of fresh air, a breakaway phenomenon, and a lyrical mastermind. Touring constantly, Grieves stunned crowds all over the country with his distinctive voice, lyrical precision, and unparalleled style. Following Grieves' encouraging reception and a stint on the CMJ Top 20 Hip Hop charts, fans speculated on what would be next for the emergent artist.

88 Keys and Counting is the response. A joint venture with friend and renowned Seattle based producer, Budo, 88 Keys is a matured record with themes that will challenge fans old and new alike. Armed with a distinct and fluid sound that will delight your ears and rouse your cerebrum, Grieves' second effort is not to be overlooked.

88 Keys and Counting is available via PayPal (below), the Lethalville online store, select retail stores, and will soon be offered on iTunes as well as other digital outlets.
No audio samples have been linked to this profile.
No member roster has been entered (to link to musician profiles.)
Status: Unknown
- Last confirmed Aug. 13, 2013
Submit info on this band to our admins