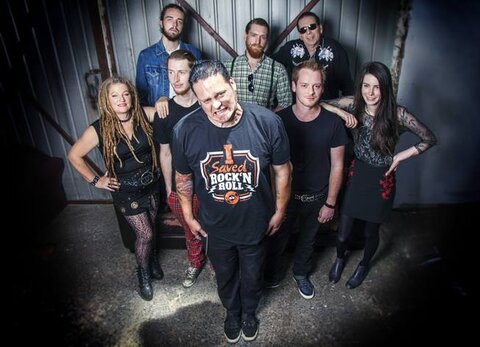 Event Photo Galleries (3)
Born from the death of many local bands and named after a RX Bandits album The Resignators are known amongst locals as 'The Band From The Spencer Street Dunnies'.

While it may seem unusual for an Australian band to play ska (for the uninitiated, ska was the precursor to reggae) it is actually quite natural. It was Australians living in Jamaica in the early 1960’s, a band called the Caribs, that played on 90% of the first ska hits (largely un-credited as a studio house band at Ken Khoury’s Federal Studios and Coxone Dodd’s Studio One), and most early ska was engineered by Aussie Graeme Goodall, co-founder of Island Records!

The Resignators are mainly known as a ska band, but the band brings a wide variety of other influences to their music, as the members come from diverse backgrounds and decades. Band members run the gamut of innocence to experience with an astounding 40 year span between the oldest and youngest! It is appropriate that The Resignators sound is an amalgam of musical styles, because the original ska in Jamaica was also a mongrel mix – of jazz, rockabilly, and jump blues heard on US radio, combined with the native mento or calypso.

The Resignators - Now we're getting somewhere

In this video: The Resignators
Posted: Jun. 6, 2013
Status: Available for Shows/Gigs
- Last confirmed Apr. 23, 2015
Submit info on this band to our admins