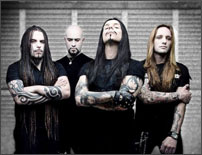 Event Photo Galleries (1)
Greek symphonic death metal quartet SEPTICFLESH — whose eight albums and performances on tour alongside the likes of Cradle of Filth, Amon Amarth, Gorgoroth, Satyricon, Children of Bodom and more have earned the group international acclaim — have signed a new North American deal with Prosthetic for album #9. This summer, the band will take part in the Metalfest Open Air European festival tour alongside the likes of Megadeth, Kreator, Behemoth and more.

SEPTICFLESH brings a unique sound to the table, a combination of orchestral and classical influences mixed in with death metal riffs and brutal vocals. The end result is a hauntingly captivating aural experience that has revolutionized the term “Dreamy Death Metal”.Formed in 1990 by current members Sotiris Anunnaki V. (guitar, clean vocals), Seth Siro Anton (bass, vocals), and Christos Antoniou (guitars, orchestra) they released their first EP, “Temples of the Lost Race” —which was rerecorded and released as part of their fourth album “A Falling Temple”—and were quickly picked up by Holy Records. They released their first full length album “Mystic Places o f Dawn” which caught the attention of Nuclear Blast, who featured the track “Return To Carthage” –from their sophomore album, “Esoptron”– on the label’s ‘Death is Only The Beginning III” compilation.

Furthering their talents and focusing in on their neoclassical influences, female soprano vocalist, Natalie Rassoulis, was then added to the lineup for their next two releases, “Ophidian Wheel” and “A Fallen Temple”. Catching the attention of legendary producer Fredrik Nordstrom (Opeth, At the Gates), they headed to Swedish Studio Fredman to create their fifth release, “Revolution DNA”. This release gained the band much popularity, attracting fans with its haunting imagery, intense guitar melodies, and theatrical vocals.

The band parted ways with Holy Records and signed to Hammerheart (now known as Karmageddon Media) for their release of “Sumerian Daemons” in 2003. At this point the band decided to split up and work on different and pre-existing projects. Christos focused his work on Chaostar, while Sortiris started a solo project under the name of Aenaos. Although after four years, the band reunited for the 2007 Metal Healing Festival in Greece, with Fotis Bernardo (ex- Nightrage) completing the line-up on drums. The band soon signed a new deal with French label Season of Mist and released their seventh album “Communion” in March of 2008. The album was arranged by gothic maestro Christos Antoniou, and featured a full person orchestra and choir.

Their latest critically acclaimed album “The Great Mass” produced by Peter Tägtgren ( Hypocrisy,PAIN) was released in April 2011 and once again featured a full orchestra. Not only did the album captivate audiences with its eerily haunting orchestral tones and brutal vocals, but succeeded at making several “Album of the Year” lists from many notable publications worldwide.
No audio samples have been linked to this profile.

Status: Available for Shows/Gigs
- Last confirmed Jun. 19, 2014
Submit info on this band to our admins