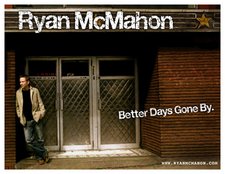 Ryan McMahon grew up in Ladysmith, Vancouver Island, British Columbia, Canada, where he began playing in local bars on Vancouver Island at the age of 17, under the moniker “Citizen Strange.”

There, he befriended several pro-moters that allowed him opening sup-port slots for bands coming through town such as Nickelback and Wide Mouth Mason, allowing him the opportunity to hone his craft along-side those already established.

In 2003, Ryan moved to Vancouver and began playing with two musicians who would become his best friends, Mike Rogerson (who produces all of Ryan’s material) and Dustin Young, both of whom still play guitars for him to this day. Together they formed the band, “Ryan McMahon & the Dirty Five,” along with drummer Jesse Smith and bassist Thomas Dowding, and the band toured throughout British Columbia and Alberta, but was never really afforded the opportunity to take it further.

The result was a 12-song rock n’roll roots album that showcases Ryan’s love for playing rough, honest music, which people of all walks can easily relate to.

With themes ranging from infidelities (“Liar”) to the music industry itself (“Song Says So”), “Better Days Gone By” is a well-rounded honest album that will surely communicate well in both the rock and acoustic formats.