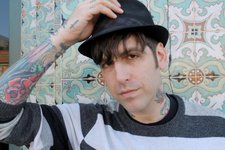 After touring relentlessly behind his last album Ghost Town Directory and receiving plaudits from sources like No Depression, Americana UK and Big Takeover, on Sep. 25th Ari Shine released Songs Of Solomon, his most honest and rugged batch of songs yet. It made the 2012 Grammy ballot for Americana album of year and NU-MODE magazine’s 5 Albums We Love alongside David Byrne and St. Vincent.
Songs of Solomon was funded by a Pledgemusic campaign. The singer/songwriter found himself supported by the grassroots following he has cultivated on the road supporting acts like Mindy Smith, Lucero, the White Buffalo, Linda Perry, Mike Peters of the Alarm and others. The campaign also raised money and awareness for the Art of Elysium, a foundation Ari works with that brings music to children in hospitals and other settings.

Reuniting with Ghost Town Directory producer Noah Shain (Dead Sara, Skrillex, Fool’s Gold), the pair holed up in Echo Park and recorded the twelve songs that make up Songs Of Solomon. Marty Rifkin, a frequent collaborator of Bruce Springsteen and Ryan Adams, played pedal steel and lap steel on seven tunes. “ Another partnership which informs the songs on the album is Shine’s continued collaboration with his wife, Canadian artist Adrienne Pierce. Ninety Nine, a populist anthem the pair wrote was inspired by the Occupy Wall Street movement.

Sonically, the record may surprise those only familiar with the singer’s more raucous past. The haunted Latin Playboys like lament “Least I Tried” is replete with Morricone style atmospherics while “Pauper’s Grave” is something akin to Zeppelin III meets Chris Whitley. Uniting all the tracks is Shine’s gutsy vocal approach which ranges from sandpaper yowls to whispered asides. Packed with memorable tunes and overflowing with heart, Songs of Solomon is Ari Shine’s richest and most realized work yet.
No audio samples have been linked to this profile.
No member roster has been entered (to link to musician profiles.)
Status: Unknown
- Last confirmed Mar. 19, 2013
Submit info on this band to our admins