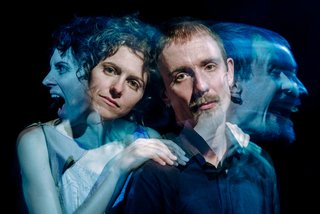 mail@vialka.com
Contact Info
Past Shows (14)
Hailing from deepest France, via everywhere and nowhere, Vialka are a devilishly high-spirited nomadic duo whose frontier-touring has taken them to all corners of the globe on a seemingly permanent world tour since their formation in 2002. Deriving their influences from traditional and modern underground music from around the globe Marylise Frecheville (percussion & voice) and Eric Boros (baritone-guitar & voice) create music that trespasses unabashedly across all borders. In recent years Vialka have collaborated with Chinese folk-icon Xiao He, formed the six-piece big band KIV Orchestra with members of the avant-klezmer unit Kruzenshtern i Parohod, constructed a solar-powered sound system for concerts in India, and embarked on a microphone-free acoustic tour of intimate and unconventional venues, continuing to break all the rules and push their own limits wherever they go.
No audio samples have been linked to this profile.

Status: Uncertain
- Last confirmed Jan. 15, 2016
Submit info on this band to our admins