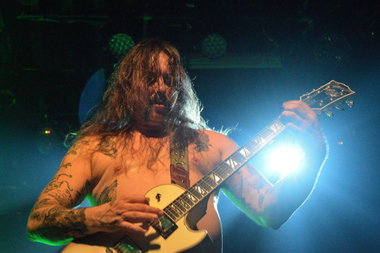 While there has been much to enjoy with the spate of band reunions in recent years, (how many fans have had the renewed opportunity to witness performances by Carcass, At the Gates, Emperor and the rest?), it’s hard to quash feelings of cynicism when a few festival shows transforms into full tours and the inevitable “first album in X years” sales pitch. Sleep’s return to the stage never felt like such a ploy, possibly given the band’s modest success prior to their original break up, or perhaps because of their members’ acclaimed output in Om and High and Fire. In any case, the chance to worship at Sleep’s altar is not one that comes with a skeptical feeling of the band being in it for anything other than the music, and indeed the music was absolutely at the pinnacle of priority for packed out Commodore audience on this dark February evening.

Originally penned as the openers for tonight, Seattle’s funeral doom two-piece Bell Witch can unfortunately add their name to the list of acts to have come out on the losing side against Canadian border security. While obviously saddened by this news (Bell Witch are fucking great, go and listen to them), familiar locals Black Wizard stepped in at the final hour, and their nostalgic, hook-laden stoner doom proved to be perhaps a more suitable warm-up to Sleep than Bell Witch’s bleak sound would have. Vancouverites will be familiar with Black Wizard by now, yet maybe it’s the fact that they’re supporting one of the holiest names in stoner doom, but the band are absolutely on fire tonight, their excitement to be on this stage clearly infecting their animated performance and grabbing the attention of the already well-populated Commodore. Playing a catchy, denim-clad brand of stoner doom akin to The Sword or Orange Goblin, the young four-piece blast out a set complete with big hair, bigger riffs, and the biggest songs, and leave the stage undoubtedly acquiring a few new fans and playing one of their best shows to date.

Sleep, though. After a lengthy introduction the most sacred of doom trios take the stage and instantly the world’s speed dial is turned down to about -1,000,000, with Al Cisneros and Matt Pike stretching the mind-bending slowness of Dopesmoker into a meditative sound voyage that defines their set from the very start. A plethora of flames flicker throughout the crowd, and for the next two hours the audience basks as the band twist and stretch their songs into a seamless, morphing wave of noise, and a thick haze settles over the crowd (both metaphorically and physically)…

Seeming to revel in the very midst of this themselves, Cisneros and Pike add tone and texture to their swirling aural creation with every chord and undulating bassline, with the former seemingly losing himself in a hypnotic trance from which he occasionally emerges to croon down the mic. Favourites such as Dragonaut and Holy Mountain get their airing, yet this isn’t a show that has clearly defined beginnings and ends, with the sound flowing in immersive volumes and thick, enveloping waves to captivating effect. Jason Roeder is impeccable in maintaining the pace with his shamanistic, primal drumming, the beat pulsing throughout the crowd and transforming his bandmates’ riffs into a transcendental experience. Cisneros is the master in this regard however, his presence conjuring images of some kind of beardy doom-metal Buddha orchestrating a collective worship to supernatural, cosmic powers, himself as absorbed as the rest of the crowd by the power of the riff.

Accompanied by psychedelic, mutating visual backdrops and soft green lighting, the show takes more of a hallucinogenic tone than one could expect sobriety would usually allow. With the marathon, drawn-out riffing and the noticeably mystical atmosphere the band defy most conventional musical parameters while simultaneously affirm the sense that a Sleep performance is truly more of an experience than just a standard metal show. Sleep triumphantly leaves the stage more than two hours later, and the crowd is clearly sated; the subdued response hinting not at dissatisfaction, but total, ecstatic saturation of sound. As the band’s magical haze gradually dissipates and the crowd disperse into the night, a sense of dumbfounded astonishment remains, and the memory of tonight will undoubtedly remain with it.