GWAR Eternal: Blothar and Vulvatron on Oderus Urungus and the Persistence of GWAR 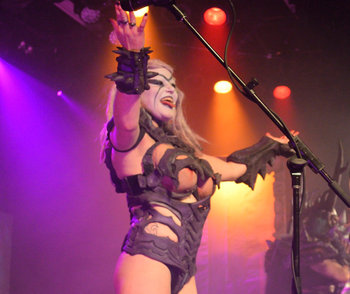 For 30 years under the guise of his monstrous alter-ego Oderus Urungus, vocalist Dave Brockie was the provocative ringleader for one of rock music’s most unique, and uniquely entertaining, bands – GWAR. Satirical lyrics and a comic book-style backstory – typified by outlandish costumes and a sensational live show filled with cartoon violence and gratuitously soaked in fake bodily fluids – have cemented a special place in rock history for Brockie’s vision and the alien rock-god mythology of Gwar.

Earlier this year, however, the future of the band was threatened when Brockie died from an overdose in his home; music fans and industry colleagues mourned his passing and wondered if Gwar would cease to exist without Oderus Urungus. Fortunately, the band announced a North American tour several months later in support of the band’s thirteenth album Battle Maximus and introducing the post-Oderus lineup, featuring two new Scumdog characters, Blothar (Michael Bishop) and Vulvatron (Kim Dylia).

On Friday, November 14th 2014, the GWAR: Eternal Tour made its inaugural Canadian stop at The Commodore Ballroom in Vancouver. While their human slaves laboured noisily on alien machinery in the background, we spoke with Blothar and Vulvatron (with a cameo appearance by bandmate Pustulus Maximus) about the search for Oderus Urungus and their roles in the current tour.

As Oderus Urungus joins the pantheon of Scumdog immortals in myth and Dave Brockie is mourned and celebrated by his fans and bandmates alike, judging by the Vancouver show the future of GWAR appears brighter (and bloodier!) than ever.