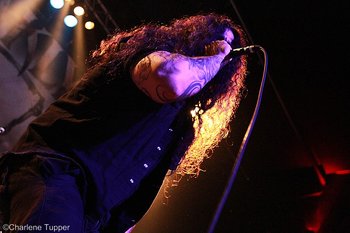 The ‘Kill the Elite’ tour has been mercilessly trampling its way across North America, and with tonight’s show including Vancouver’s newest international extreme metal export Archspire and being headlined by Canadian legends Kataklysm, it’s set to be a heavy one. Death Toll Rising begin however by playing to a pretty empty Rickshaw, and although they leap into their set with passion and aggression, their first few tracks of death/thrash metal fails to spark much of a reaction from the crowd. It doesn’t dishearten these young Albertans though, and as they charge through their set a few more heads begin to appear in the Rickshaw, many of them nodding appreciatively. Gaining momentum with the expanding crowd, Death Toll leave the stage having successfully warmed the audience up for the impending extremity.

And Archspire are the ones to begin delivering it. Clearly happy to be playing a hometown show the live four-piece careen through a set of tech-death virtuosity and guttural growls with admirable precision and skill. Focusing on their imminent Season of Mist debut 'The Lucid Collective', Archspire are great to watch not just because of the animated and Olympian performance of all of its members, but also because of the genuine heaviness and brutality of their songs. Although guitarists Dean Lamb and Tobi Morelli don’t miss an opportunity to display their impressive guitar playing abilities, they do it in such a way that adds structure, extremity, and delicious dissonance to their songs; a feat many tech-death bands fail to achieve. Somehow managing to play these unrestrained musical-marathons while stomping about the stage like men possessed, Archspire demonstrate why they are most exciting new(ish) purveyors of technical extremity going at the moment, and a band Vancouver can be damn proud of.

Next up are Aborted, and these European masters of gore-grind waste little time in churning out their blast-happy and downright visceral tunes. Jumping right in with the classic ‘Dead Wreckoning’, Sven de Caluwe (aka Belgium’s most furious man) leads his band through a savage set focused mostly on 2012’s ‘Global Flatline’, and does so with the wild-eyed lunacy that has become his trademark. Of course there are a few notable mentions from the band’s back catalogue thrown in, and when the band reveals a few yet-to-be released tracks from upcoming record ‘The Necrotic Manifesto’, the place goes as batshit crazy as the aural battery Aborted emit from the stage. As always Sven is the centre of the show, with his maniacal stage presence and poisonous banter (“you’re all miserable fucking pricks!”) helping make the Aborted live experience as thoroughly entertaining as it is, while his bandmates play with the kind of precise savagery that most death metal bands can only dream of achieving. Grinning like lunatics from beginning the end (except Sven of course), Aborted are fast, ferocious, and fucking fun – all the things death metal should be. Come back soon!

With their stripped-down, chunky death metal Kataklysm almost seem clumsy compared to the band that just left the stage, yet these stalwarts of Canadian extremity put on a show that the crowd eat up with glee. Due to having to fly back to Montreal, guitarist Jean-Francois Dagenais has been replaced by Aborted’s Danny Tunker, who has impressively learned the set in a couple of days for tonight’s show. Even the most casual Kataklysm listener would recognise many of the songs played tonight, with ‘Blood on the Swans’, ‘As I Slither’, ‘In Shadows and Dust’, and closer ‘Crippled and Broken’ being received to roars of appreciation and some furious pit action. Maurizio Iacono plies his usual trade, trudging and grunting about the stage while the band pound away behind him. The crowd lap it up, and although Kataklysm’s grooving, mid-tempo style may not be to everybody’s taste, the reaction at the Rickshaw tonight reflects the band’s continuous appeal and longevity. Posted: Jun 5, 2014
In this Article Artist(s) Aborted, Kataklysm, Archspire, Deathtoll Rising Resource(s): Rickshaw Theatre, The Invisible Orange