Interview with Marcus Geard and Glen Pine of THE SLACKERS 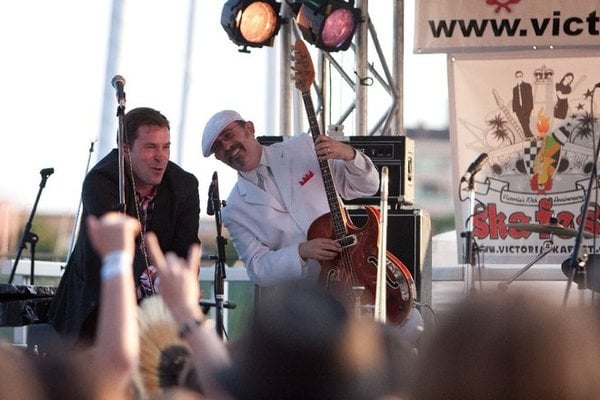 This interview also appears in issue #51 of Absolute Underground.

New York’s The Slackers have been combining ska, dub, reggae, and rock n’ roll for over 20 years. The Hellcat Records group brought their energetic stage show to Victoria, Nanaimo and Vancouver early this March. I sat down with bassist Marcus Geard and trombonist/vocalist Glen Pine after their Victoria show.

What keeps bringing you guys back to Victoria?

Glen Pine: We’ve been here a number of times and the folks here have been so fantastic, really supportive. The people really know the music and are into the music, and it’s such a beautiful place. For us, the shows are great, really well-attended and enthusiastic, but we get the fortune to arrive by boat and see the beautiful nature coming in.

Since you guys have such a large catalog of music, how do you pick what to put into the set list?

Marcus Geard: A Ouija board. We have a custom-made dartboard that we throw ninja stars at.

Less Than Jake has a wheel that they spin to select songs to play.

GP: Oh, I remember hearing that.

MG: Are you shitting me? I’ve been planning to do that. Son of a bitch, I even found a guy who could build it.

Yeah, if you guys did it, you’d be the second ska band to do it.

MG: No. I’m not doing it now. Fuck me; I thought that was an original idea. But truthfully, I write the set lists. I keep the sets from most of the shows we do. I referenced the set list from the last time we were here so we didn’t play more than two or three of the same songs as last time. We just mix it up. It’s got to be constantly changing. You could come follow us for 30 days, and see different songs every night.

You guys are very popular in the punk community even though what could be considered “punk rock” is sonically much different than what you guys play. Why do you think this is?

GP: For me, all the music fans I know listen to all sorts of different stuff. Like you’ll probably find hardcore guys who hear ska, and they’re like “Hey, I like this too.”

You guys are of course on Hellcat. Do you think that some of this punk/ska stuff could be related to what Tim (Armstrong) does?

GP: When you look at what The Clash did, seeing the connection with Jamaican music and what was going on in England, Tim is from that same lineage. He was just deliberate about it.

It’s like when you get one of those Give ‘Em the Boot compilations, and there’s a really heavy hardcore song, and then you guys, and then another punk song, and then The Aggrolites or something.

MG: And I think he gets punk rock. I think that was really cool of him.

GP: Definitely. And I feel like in some ways, as a musician, you have to a bit of a historian and say “This is stuff I liked growing up and I want to keep this stuff going.”

AU: Awesome, I also noticed you guys have made a very concentrated effort to tour Japan.

MG: We love Japan. It took me awhile to get into the food though.

MG: Really awesome actually. You hear a lot of people say Japanese audiences are reserved, but they’re not so much reserved, it’s just they listen. They’re respectful and they appreciate good music.

GP: They have a better understanding of shit too. A Japanese ska fan is bound to have a three-feet-deep collection of vinyl.

Another thing I noticed was on earlier records, Vic (Ruggiero, keys/vocals) wrote most of the material, but on later albums, you guys have all written songs. How did this collaborative style come about?

GP: I think it’s important for the longevity of a band to have everyone feel invested, where you’re not just playing other people’s songs. I think it keeps it fresh.

MG: I think just over time we all evolved as songwriters. The Slackers is a very competitive organization. We all bring songs, but you bring a song, it has to beat one of Vic’s songs to make its way onto a record.

AU: You’re in Canada, and you’ve worked a lot with Chris Murray, a Canadian, most notably on the Slackness album.

MG: I’m a big Chris Murray fan. It always blows my mind how he can get on stage in front of huge amounts of people with just him and his acoustic guitar and get people dancing and singing.

AU: How did this connection come about?

MG: A bathhouse. We met in a Turkish bathhouse. He was getting a massage.

GP: In the East Village.

MG: Yeah, and he was in the not-happy-ending section. We were in that section too, because the full service is very expensive and I don’t have that kind of money.

GP: We were snapping towels.

MG: And we were doing it on the upbeat.

Pine: And he was like “You play ska? We should hangout!”

Michael Luis is a writing/journalism student at The University of Victoria. He writes for Absolute Underground and Concrete Garden, is the director of the UVic Ska and Reggae Club, and plays drums in Victoria-based reggae/dub/ska band Blackwood Kings.