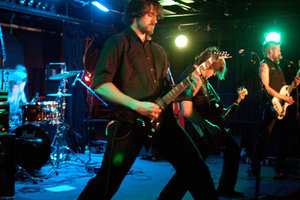 I missed Mother Died Today's final Vancouver show, and judging by the songs on their Myspace, I would have enjoyed them. For what it's worth, the crowd reaction to them seemed to be quite positive. Sorry, guys. I really do try to show up early.

Archspire have one massive advantage over most other modern technical death metal bands: they are able to actually play their songs live. Unfortunately, I didn't find much to hold my interest, because their music relies too heavily on breakdowns and random noodling and lacks coherent structure. While they're certainly better than Brain Drill, I wouldn't recommend them to anybody.

First Reign come across like a more melodic Protest the Hero. Not that there's anything wrong with that: I happen to quite like Protest the Hero, and their style isn't even close to being played out yet. I enjoyed them, but felt that the lead singer's cleans weren't all that convincing in a live setting.

I decided to check out Ontario's Woods of Ypres for an interesting reason: the backlash they had received from online purists after they supposedly "sold out" (meaning that their album sales reached triple figures). I figured that I'd either agree with the guardians of true metal (as I am forced to do with the utterly terrible Nachtmystium) or I'd find my new favourite thing (as happened with Krallice and Weakling, who actually do stretch black metal). As it stands, I found myself neutral at the end of the night, with a definite preference for their earlier, more traditional material. The later stuff is very catchy, but doesn't have the same emotional impact (at least not in a live setting). Nevertheless, I have tremendous respect for this band as artists: they stand by everything they've ever recorded, and their set draws from all four of their albums equally. Seeing Woods of Ypres made me want to give their recorded material a proper listen, but the concert itself didn't stun me.

As a final note I'd like to thank whoever was handling sound at the Biltmore: he did a fantastic job. Every instrument came through easily, making my job a hell of a lot easier. Thanks, man. I wanted to get your name after but had to leave. Posted: Aug 16, 2010
In this Article Artist(s) Woods of Ypres, Archspire Resource(s) The Biltmore Cabaret, The Invisible Orange

Hardened rock from Victoria BC

A Wide Range from Victoria BC

To provide a world class community festival with an emphasis...
2243 Beacon Avenue Sidney BC
Open / Operational

Located in the basement of the Empress Hotel Owner: Canadia...
Closed / Inactive