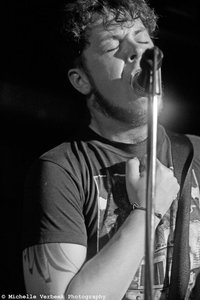 On this night of rock n roll The Jolts opened the show because their bassist was busy eating poutine. To make up for this The Jolts had not 1, but 3 different stand-in bassists throughout their set. The first guy came out in a pink striped sailor shirt and cowboy boots to the sounds of Bloody Eye Socket and a crowd quickly formed in front of the stage. Once the new bassist loosened up a bit he began shaking what his momma gave him (and I’m not talking about the pink striped shirt) while Joey Blitzkrieg was hawkin’ loogies behind his back. After 4 songs they pulled the ole switch-e-roo and now a tall bassist with long hair who looked less than impressed was on the stage. The band hammered out 3 brand new tracks (from an album that will hopefully be released soon) that had the audience acting more than impressed. Then Matt L. Snakes from the Battle Snakes played the role of bassist #3 and the band went on to play DXM and a Motorhead cover. Dr. Dylan Danger threw his mic (stand and all) into one excitable dudes face and it was on! But it didn’t end there. Back by popular demand the pink shirted hatless cowboy re-took the stage and serenaded Kaminari Lovers to the audience.

It was at this point in the night that my friend Dan laid down a plastic card at the bar and told me to drink on him. With a notepad in hand, not even this non-paying job could prevent me from drinking free beers. Did I mention I was half cut before I got there? No I didn’t, and I’ll tell you why; it is frowned upon in the writing community to write about how wasted you got at a gig you’re reviewing. You’re supposed to write about what kind of guitars were being played, what kind of moves were being shook on stage and NOT how many beers it took before you slipped and fell on the stairs. Sadly I have now made a writing faux pas in telling you I was drinking for free on my friend’s dime, but I am doing so as a small excuse as to why the quality of writing may go a little down hill from here on out. I’m as full of excuses as my belly was full of pilsner that night.

The next portion of the evening was pounded out by the Battle Snake quake shake that was no fake! (Please refer back to the last paragraph) This power trio pummeled the crowd with song after song of heavy rock n roll. I wasn’t sure if I should shake my hips or bang my head, so I tried both and after I threw out my back I decided this was neither the time nor place to test out my new epileptic fit of a dance move. Frontman/guitarist Matt L. Snakes (I wonder what the L stands for?) (I’m gonna put my money on Laurence for no other reason than I have an Uncle named Laurence) really brings it. He’s clad from head to toe in denim (someone really needs to get this guy one of those cool denim hats that are cool, I swear they’re cool) and sporting a rock n roll chin strap, a look that no one has been able to pull off since the Amish. He was grabbing cans of beer with his teeth, tipping his head back and guzzling them down mid song! He got too lazy to play a guitar solo and did the a cappella version with as much gusto as you’d come to expect from someone wearing that much denim. The bassist was a rough and tumble character as well and his vocals brought a rad style change making some of their songs meaner. The drummer was pretty forgettable, not because he wasn’t good or anything, but I just forget what he looked like, or what he was doing. He was playing the drums god damnit, once you’ve seen one of them do it you’ve seen them all do it. (All angry drummers can forward their hate mail to The Skinny Magazine if you ever figure out how to use a keyboard) But seriously, for rock n roll this was heavy and so powerful. The Battle Snakes are doing it right, and as tight as spandex on a fat ass.

There isn’t a band in the city that could ever do these opening acts justice, but wait, someone got The Spitfires on the phone, and low and behold they were up for the task. The Spitfires have been around the block and lack nothing in the energy department. The singer gets the crowd involved while making his manic faces and throwing the mic around. The guitarist does solos behind his back and drops to his knees as if praying to the gods of rock n roll. They played this show as if it were their last and they even made the toilets overflow they rocked so hard. I’m just assuming by the stench that arose in the bar that the toilets were overflowing, because by this point in the night I had decided to hold it in rather than investigate and see a mammoth log float by. When the smell died down the hard rocking did not. The Battle Snakes joined The Spitfires on stage for a rousing rendition of High School, (this put Mr. Snakes, middle name Laurence, on the stage for all three bands that night) and even then the crowd wouldn’t let them leave until they played the favourite ‘Bringin’ Me Down.’ The Spitfires played it and packed it in, while everyone else spilled out into the street to find there way home or to the next party, while the bar manager called the janitor. Posted: Jul 6, 2010
In this Article Artist(s) The Spitfires, The Jolts, Battle Snakes