Look but Don't Touch! OR ELSE!!! An interview with the Voodoo Dollz's Little Miss Risk 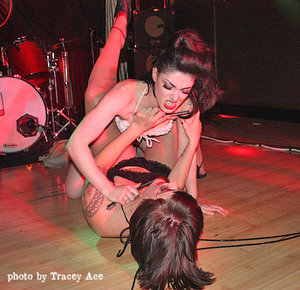 Look but Don't Touch! OR ELSE!!! An interview with the Voodoo Dollz's Little Miss Risk by the Skinny Magazine.

The Skinny: How long have you been dancing burlesque with Big John Bates in the Voodoo Dollz and did you bring all the ideas to the table?

Tristan Risk: I have been with the band since 2005. I did a one-off show early that year and then once I finished my college and got my certification, I started touring and haven't looked back since. I initially started doing the numbers that the band had been doing for years. With a steady line up change for two years the different girls each brought something new to the show. Once I settled in I started tweaking things to suit my own, shall we say, 'subversive' nature. Sometimes I will have a very clear idea of what I want to do for a number and other times John and I will bounce ideas back and forth to come up with something and build from there.

The Skinny: The different acts that the Voodoo Dollz do on stage - do you have particular names for them? Like the naughty nurse routine, the Cat Fight?

Tristan Risk: I generally don't name the numbers other than to refer to them as the song titles. It's kind of like naming a stray animal, and once you do that you find you've gotten too attached and you can't let it go. So it makes it difficult to switch up numbers and ideas.

The Skinny: I know that you have toured across the States and have danced burlesque in huge festivals of 10,000 in Europe - has anything happened while on stage? How dangerous has it ever gotten for you? (John said that you have been grabbed off from the stage )

Tristan Risk: In all the globe-trotting we've done I have been given the opportunities to shake my ta-ta's at a number of different audiences. Part of the joy of travel is experiencing different cultures and the downside to that is sometimes the "look but don't touch" rules don't always apply. I think that the worst experience (and the one John is referring to) was a festival in Italy. I had live fire in my hands and I got pulled off of the stage with it. I was shocked first and livid second. I'm pretty happy to note that the persons responsible were taken out back to have the grunt beaten out of them, but it was an eye opener since no one has ever been quite that ballsy. More often then not when I get grabbed these days it's mostly women who are drunk and think that they're being funny.... but it's more funny when I turn around and swat them.... Honestly, the barricades at some shows are not to keep the audience away from me - but me away from the audience...