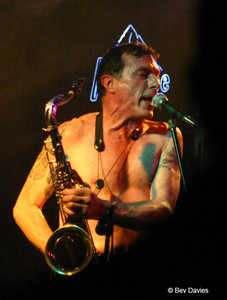 The Manglers and The Engimas at the Bourbon, January 8th
The Sick Sick Sicks, Gnash Rambler, Little Guitar Army at The Railway, January 10th
By Allan MacInnis

Nothing like a good cover tune to make a great live show even better. Case in point: at The Railway, January 10th, Little Guitar Army doing the Blue Oyster Cult’s “Godzilla.” The original is a bloated anthem from what even noted BOC fanboy and fellow coverer Mike Watt has derisively called “their Journey period,” forever associated by those who were there (ie., not one but two Pacific Coliseum gigs in the 1980’s, for me) with a giant cheesy Godzilla head that used to rise above the drumkit and blow smoke (but no fire). LGA make it their own, natch, but they make it better, digging deep into the structure and finding something funky and playful and living, the arena-rock plod falling away to let the humour ‘n’ vibrant goofiness shine through, the song redeemed of its own excess by the band’s surgery. And not only do they do a favour by reclaiming and revitalizing a song others might think best forgotten, people unfamiliar with their (even better) originals (“Can’t Fix Stupid,” say) are given a bridge to cross, a recognizable peg to hang their ears on - “understanding LGA 101,” like, with a warm “hey I know this one” smile spreading across their faces. Brilliant move; and goddamn do these guys play well, esp. given their sprawling membership, spilling over from the stage into the drinkin’ space...

Sometimes a cover can be a political/personal statement, too. Nick, who may or may not have quit the LGA that very night, led the previous band, Gnash Rambler, through a dynamic cover of “No Escape,” affirming something that unfortunately has changed little about Vancouver since the Young Canadians recorded it, Nick explicitly making of it an anthem to the Olympics security state: that was then, this is now, and it still fucking sucks. But there’s more to it than that: if I’ve got it right, Gnash Rambler first covered this (also at The Railway) for an Art Bergmann tribute, long before Art was coaxed into playing last year’s Vancouver show. And if paying homage to Art wasn’t enough to motivate a cover, bassist Regina Michaelis was originally inspired and instructed in picking up the bass by the late Jim Bescott of that band, her deft recapitulation of his wickedly memorable basslines a tribute to a sorely missed Vancouverite. Covers can mean a lot.

Mind you, neither Gnash Rambler nor the Little Guitar Army have anything on The Enigmas (doing a one-off reunion at the Bourbon January 8th) for density of cover tuneage. The shirtless, sweat-sheened, and amply tattooed Paul McKenzie - soon to leave Vancouver for Austria, pointing an accusing finger at the audience and saying he might have stayed if we hadn’t voted for Campbell twice - led the band (with ubiquitous Slow/ Tankhog/ Canned Hamm/ Evaporators big guy Hamm on bass) through so many covers that their originals (“I Was A Teenaged Barnacle,” “Windshield Wiper” and so forth) were completely recontextualized, taken out of their original milieu (goodtime ‘80’s pop-punk) and decisively re-identified with proto-punk garage/psych of the 1960’s/ early ‘70’s: “You’re Gonna Miss Me,” “A Question Of Temperature,” “Talk Talk,” “I Got A Right,” a Sonics song I didnae know and not one but two MC5 songs (the obvious jam-kicker, also done by LGA just two nights later, and “Call Me Animal,” much benefiting from the sheer lack of anything remotely hippielike in The Enigma’s muscle). The only (unarguably non-proto) punk cover of the night was The Damned’s “New Rose.” If there’s a prevailing mood in the music scene that it’s not cool - as Kato Bonito, bassist for Billy Hopeless’ new band The Bonitos, was opinin’ before the show - to have fun when you rock, no one told The Enigmas nor the audience - a packed house come to pay tribute to Danny “Shmanny” Nowak of The Spores, whose 50th birthday the event was in honour of.

The truly great thing about cover tunes, of course, is that they affirm the love of the music that inspires and drives everyone on a scene like this: for example, The Manglers, a Stranglers tribute band, who preceded The Enigmas onstage. Never mind Mike White, Tiny Tina, or Nearly Neil - cases where enough people will get out to see what they do to make it potentially viable for a working musician to learn the songs, however he or she feels about ‘em: the motives here are unmuddied by matters economic, ‘cos it’s a given no one will make enough money ever from even the best of all possible Stranglers tribute bands to afford a case of anything but the cheapest beer after the show. Do we care? Fuck no, let’s play “Golden Brown.” We’re only in it for the love. And Danny - who tells me there is no news to be had just yet re: the oft-whispered, much longed-for Spores reunion (since “The Enigmas are a hard act to follow”) - even got up on stage to sing one song, “London Lady,” letting us know he may be older, but can still fit into his leather pants.

Danny has a great story that touches on the strange potency of cover tunes, by the way (which I’ll recapitulate from my Spores piece in the final print issue of Skyscraper, for thems that haven’t read it). Danny eventually left music to work as a director of photography, most famously (for music fans) shooting Hard Core Logo for Bruce McDonald. When getting live footage of crowds at The Town Pump, Bruce suggested playing Spores tunes to motivate them. “So when we’re getting crowd shots and stuff like that, they’d be pogoing around, dancing around to Spores music! And we got to say, ‘Have more fun! Have more fun! You’re enjoying it! This is GREAT!’ It was surreal. And if you remember in the movie, they play ‘Sonic Reducer,’ right? Well, my band used to play ‘Sonic Reducer’ for our encores in The Town Pump! It was kind of a weird twilight-zone feel...” (Spores fans hankering for a couple of other cool covers should make sure to put their News Weather And Spores CDs in their computers, btw).

Yep, nothin’ like a good cover tune. Nardwuar The Human Serviette would agree - having had Andrew WK to do a rip roarin’ rendition of The Subhumans’ “Oh Canaduh” on the Wild Pear single (along with a Leather Uppers song and The Evaporators’ version of Quebec band Les Hou Lops “Oh Non” on the A-side). Before the show, we chatted about other eminently coverable Vancouver songs, like The K-Tels “I Hate Music,” which pleasingly ended up on the Bourbon deejay’s playlist that very night, alongside The Spores “Narcs In My Pants” (the revised version) and Slow’s immortal “Have Not Been The Same.” (Nardwuar’s interviews are now being played on WFMU, by the way - how cool is that?). Speaking of (Evaporators’ bassist) Hamm, anyone remember Tankhog's "I Woke Up In Love This Morning," originally by The Partridge Family? Now that's a cover that transcends its source...

...and speaking of “Sonic Reducer,” I haven’t heard that played live since Chris Arnett of The Furies got onstage with Duvallstar at Richards on Richards some years ago. It’s not like that song can ever be worn out; could someone get on it? (Oh: didja know Rocket From The Tombs have a new single? Didja even know that The Dead Boys “original” of that song was kind of... a cover?). Posted: Jan 14, 2010
In this Article Artist(s) Gnash Rambler, Little Guitar Army, Sick Sick Sicks, The Engimas, The Manglers Resource(s): The Bourbon, Railway Club