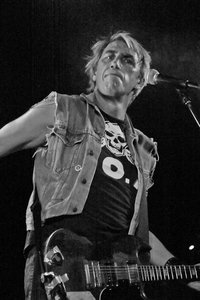 The Skinny : You never let us down with your shows in-your-face politics and angry, loud punk. The Commodore for DOA’s 30 year Anniversary and DVD Release (Men of Action) two weeks ago was no exception. How has playing live changed for you over the past 30 years?

Joe ‘Shithead’ Keithley: That’s a good question, we always had a good track record of pulling off good shows in the old days, but it some ways there was less preparation, meaning we would just kind of arrive and start playing and the emotion of the event would soon take over. These days I kind have things more prepared, which is good ‘cause I can focus more on the show and less on stuff arriving late, the gear not working, having to fight with the promoters. So now if we arrive really late and they scream you’re on in 10 minutes I don’t boil over like I used to. But in the long run, it’s always the emotion of the particular gig that soon takes over, so in that way it’s still very similar to the old days.

The Skinny: I heard that Chi Pig had a hard time getting in past the door guys to play the opening slot for DOA, and the Commodore wouldn’t let anyone go in or out for their damn nicotine addiction.
Joey: The bouncers were definitely by the book, but I have heard of Bob Dylan not being able to get into his shows ‘cause nobody believes who he is. The Commodore needs a smoking section.

The Skinny: How long have you played guitar, because you are really good, not just at punk thrashing, but also with solos.

Joe: Dimwit (RIP) and I both used to drum when we were teenagers. By the time I was 18 I realized he was ten times the drummer I was so I figured I had to take up guitar so I would not get kicked out of our teenage rock band So I have been playing for 35 years and I have had that Gibson SG I played the other night (we call the guitar Northern Avenger) for 34 years.

The Skinny: I love your song “Police Brutality” that was inspired by Robert Dziekanski’s death by Police tasering. The latest Taser can target three people at the same time. Where do you see this ending?
Joe: Hopefully it ends up right back in the RCMP’s laps for being irresponsible and covering up and those four police that killed Dziesanski should at the very least be fired with a complete loss of all their benefits. But a multi-pronged taser sounds really rotten.
Skinny: What kind of advice can you offer our readers if faced with a Taser?

Joe: Well, it can be pretty hard when you’re upset at something, but it’s just like an airplane or an airport, when you meet a cop act as calm as you can, if you start raising your voice and questioning them you will likely get tasered, and yes I know that sounds ridiculous and anti-democratic, but you stand a much better chance of not ending up dead. Then you can sort out the injustice later.

The Skinny: How do you feel about Mark Emery being extradited to the US?

Joe: It sucks! it was really a harmless thing that he was doing. The Canadian government should make a deal so he can at least serve out his sentence in a Canadian prison. But of course the Conservatives won’t lift a finger on his behalf

The Skinny: Vancouver just lost their hardcore bar on October 1st. Do you have a Cobalt memory or any words for Wendy Thirteen?

Joe :Well, Wendy is resourceful, so I’m sure she will find something that fits the scene like the Cobalt did. I hope she does and I wish her well.
My fave memory at The Cobalt was about seven years ago, when Brian ‘Who’ Else and Lianne got married. They asked me to marry them on stage (which I was qualified to do, being known as the Reverend Joe Shithead of The United Pagan Church) That is perhaps collectively the most wasted crowd I have ever seen in my life. It was a lot of fun.

The Skinny: The DVD D.O.A The Men of Action was great for hearing the tour stories and how DOA played for so many causes, worked hard, took chances and grew. What was your favorite time in your 30 years with DOA?

Joe: That’s a toughie, some of our overseas travel to Europe and China would have to be up there. There’s a big long story about getting busted in the old Yugoslavia in 1984 that’s one of the funniest. But most of all I am just glad that we are still playing and people still dig it.

The Skinny: What plans do you have with DOA?
Joe: Starting to work on new songs for a new studio album (out August 2010) but in the meantime there is a new DOA comp (with 5 unreleased tracks) called DOA “Kings of Punk, Hockey and Beer”. That’s out, and the songs obviously revolve around hockey and beer, strangely enough.

The Skinny: Where can we buy the DVD The Men of Action (containing 26 videos, and also Joe’s entertaining telling of DOA’s history)
Joe: People should be able to find it at Zulu, Red Cat, Scratch and HMV, hopefully it’s about $20.00 The Northern Avenger cd is included. Posted: Oct 6, 2009
In this Article Artist(s) D.O.A., Joey "Shithead" Keithley