Propagandhi with the Rebel Spell and Cambridge 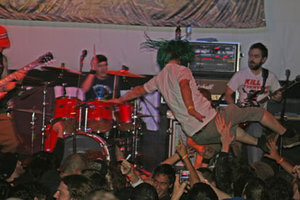 After braving the absurd line-up of punks with little choice but to chain smoke furiously in an attempt to keep warm, I finally made it inside the Rickshaw Theatre---after an hour and a half. I guess that’s what you get for not buying a ticket in advance. This would be Propagandhi’s first Vancouver show in a good nine years, and clearly no one was about to miss it. The sold out crowd milled about the venue, swilling Granville Island like champs anxiously waiting for the headliners to hit the stage.
Despite the minor line debacle, I still managed to catch the majority of Cambridge. Though it had been quite a while since their last show, and they were a little rusty, the quartet still delivered a blistering and passionate set, highlighted by the
second guitarist breaking a string at the beginning of a song, but impressively managing to time the restringing operation perfectly. As the last strains of the song sounded, he strapped on his guitar and yelled into the mic, “I’m ready!”
It was great beyond words to see local heroes the Rebel Spell back in action as well, after what felt like an incredibly lengthy hiatus. The band, noticeably missing original bassist Chris in what is rumoured to be a rather messy situation, played a short set at an inhuman speed, blasting through old favourites and new soon to be classics. It was amazing to see the majority of the audience trying to keep up with the rapid fire vocals; the perfect warm-up for Propagandhi.
Before the main event, we were treated to a little activist preaching and a failed environmental video about the tar sands that prolonged the wait needlessly. The man wisely moved through what he had to say quickly---the masses were restless. When the Winnipeg quartet finally hit the stage, the crowd went insane, taking backwards nosedives off stage and singing along to the anthemic protest songs with fists raised. The band sounded as tight and relevant as ever, running through classics such as “Back to the Motor League” and “Last Will and Testament” while breaking out a few from their latest, Supporting Caste.
Chi Pig of SNFU even made a guest appearance on stage. The bassist, Todd Kowalski declaring, “fucking Chi Pig from SNFU everybody! SNFU are the best Canadian punk band ever!” High praise from the solid senior act. Chi’s stay on stage was brief, and the band got back at it, hammering away with practised precision.
Propagandhi ended their set late to torrents of applause, quickly coming back for an encore of the most distinctly Canadian song from their latest, an open letter to Ron MacLean, “Dear Coach’s Corner.” I left feeling oddly content after that. Let’s hope we don’t have to wait another nine years to do it all again. Posted: Nov 13, 2009
In this Article Artist(s) The Rebel Spell, Propagandhi, Cambridge Resource(s): Rickshaw Theatre