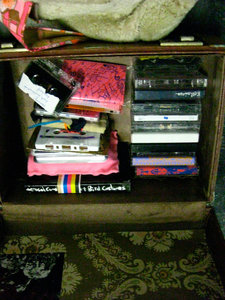 Performing at the Vancouver New Music festival under the alias DJ Tapes, Aja Rose Bond is one of the founders of the Her Jazz Noise Collective, a group of aspiring young noisy women (also including Anju Singh of Ahna, Prophecy Sun, Brady Marks and many others) who have been active on the Vancouver experimental music scene these last two years. Through VIVO, they have curated a regular program of improvised music and random weirdness called Women’s Studies, and currently host “a weekly open jam at a secret location - ladies should get in touch if they want more details.” Aja updates me on the status of the collective: “There are currently about ten organizers and the group feels really strong. We still have enthusiasm and inspiration for our work and play. People are always fluxing in and out - it's the nature of the collective - but currently our crew is tight and I am in love with them all. Seven of the core members have just worked their butts off to help make Rock Camp for Girls, both in Vancouver and Portland, totally awesome. Props to them!”

Her Jazzers are also currently working on a double-CD compilation of music made since their inception; one of their debut performances was at the Vancouver New Music 2007 Guitars! Guitars! festival, which spawned the Knight Me! CDr, with delightful homemade packaging and a title that playfully poked at fellow attendee Sir Richard Bishop. This year, the festival’s title is “Copyright/Copyleft,” with performances that challenge archaic notions of copyright law and suggest new models - including appearances by Aja, Plunderphonics pirate John Oswald, Negativland’s Mark Hosler, Scanner, Chris Cutler, and the delightfully strange Vicki “People Like Us” Bennett - also interviewed below.

Aja conceived of the DJ Tapes project as “an homage of sorts. I gather up the cassettes lovingly released by my community, I make mix tapes from my friends’ stunning music collections, and I am always hunting thrift store bins and free boxes. Sometimes I record over and over them as I enjoy the degradation of the sound. I remember a Her Jazz jam that we recorded over a Frank Zappa mix tape, afterwards we could hear both sounds perfectly blended together.” Though for many, audiocassettes are an archaic technology, Aja feels that “tapes are so beautiful - mechanical, magnetic, durable, reusable. They are my favourite format for musical recordings.” She’s a “very lo-tech person,” she explains. “I have never really caught up with the pace or capacity of musical consumption that most young people in this culture function at (which I am neither proud nor ashamed of). I haven't ever downloaded music and I still listen to a Walkman. I like that when I make a mix to play as part of one of my sets, I have to listen to each song as I am dubbing it, there are no shortcuts. I am saddened by what is lost in the digital age of music, namely the beauty of the art object, the tactile experience of handling the artefact. I suppose I am holding on to that which is such a big part of my enjoyment of listening to recordings and I hope it can be a reminder to others. Records are really big again and the contemporary tape movement - though obscure - is very prolific. It's a little nostalgic but also the most practical and simple way for me to perform and release music given that I really don't take to new technology.”

Though as much a pirate and masher-upper as anyone in the fest, Aja has had no personal difficulties with matters of copyright; however, she tells me, she feels “strong opposition” to the current state of the law. “It's indecent that in the name of compensating artists for their creative work - which rarely happens despite the claims - corporations are able to intimidate and sue people who are doing very little harm if any by either sharing files or progressing creative ideas and interacting with their culture. The copyright laws, which originally were created to maintain a balance between progress and ownership have been so manipulated in the last century by capitalist interests that they have the potential to ruin lives, not to mention the development of patenting lifeforms and intellectual property to the result of inhibiting not only artistic progress but scientific and medical as well. All for serving unbridled greed... yuck!” She is “not against laws being in place for the recourse of people who feel they are being exploited or for people whose ideas or values are being grossly misrepresented by imitators or opportunists. But the laws have been changed to serve these opportunist exploiters.” Aja highly recommends the documentary Rip: A Remix Manifesto, about remix culture, creative commons and copyright laws.”

Aja - trained in trumpet, but self-taught in almost all other regards - has experienced her involvement with the improvised music scene in Vancouver as quite liberating. “I don’t think I would have felt comfortable getting into anything other than complete free improvisation, without any reference to time signatures or keys or any of that. It was a complete freedom that I needed, and the idea that there are absolutely no mistakes and everything just is what it is. That was exactly what I needed. And it’s been working for that long, and it’s really rewarding.” She also performs with Diadem, a “multimedia collaboration with my husband, Gabriel Saloman” which draws in part on their own divination cards for composition ideas; and she’s a member of Yesod, with Gabriel and Jamie Abugov (of Tusk of Lighta!). She also tells me she had her “first solo art show at Goonies in July an have been trying to bring together all the various threads of my work and spin them into a stronger more cohesive practice that includes (but is not limited to) sound, installation, sculpture, design, curation and social practice which includes a lot of collaboration. I always have a million things going on but sometimes it feels like they are all happening on different planes... I guess I am trying to unify them.”

Since 1992, Vicki Bennett - under the name People Like Us - has made sample-derived sonic collages that can be quite gleefully perverse. She has her own radio show on WFMU (“DO or DIY”) and has worked in film and animation. Her new live audio-visual set, “Genre Collage,” will debut in Vancouver; she describes it as an examination of the concept of genre made through a combination of “compositing techniques, audio/music collage, and animation... By manipulating patterns, syntax, moods, narrative elements, recurring icons, characters and film stars held within selected movie genres/sub-genres (i.e. action, adventure, comedy, crime/gangster, drama, epics/historical, horror, musicals, science fiction, war and westerns), we are creating a humorous, surrealistic, yet informative take on the content held within. The sound is partially taken from the films and partly from music holding corresponding messages, mood and lyrical content. The moving parts are cut around and collaged into each scene, complete with the source's accompanying audio and added contextual musical collage. This project is supported by Arts Council England,” and will see Ms. Bennett in Vancouver for the first time. She’s excited about the festival: “I know half of the artists performing, they have been well chosen, many (including myself) have been working in the field for decades - I'm really pleased to have been invited.”

Bennett approaches both live and studio work “in the same way,” she tells me. “Both involve found footage being collaged into a playful (and sometimes sinister) composition. I prefer to do studio work although I certainly like to get out there and have an audience and socialising with other artists since otherwise I can only imagine that people are experiencing the work. The live set up is simple (although the output looks and sounds complicated, as making the work is!) - I make video sketches and use the sound outputted from this footage, and then make audio compositions in relation to this - and take them apart again to recreate live.” She tells me “days and days of downloads” of her music and updates can be found at peoplelikeus.org, as well as on WFMU’s website and on Ubu Web. “I've been sharing media for free for 9 years now - much longer than most.”

I asked Vicki to sum up her views on copyrights and sampling. What follows is her statement:

(Vicki Bennett): I believe in the creative's right to reflect upon and comment on culture, in whatever guise/method/format that is necessary within the bounds of their own moral decency, and it is the latter which should decide whether this is OK, not an unworkable and outmoded law which is based around commerce.

In the most recent decades published works which have already been duplicated on mass and had their chance to thrive, and have their own set of connotations and connections which simply cannot be taken away from if sampled/appropriated - they can only be added to.

We will all be in deep trouble if we do not have freedom to interact with public information - the commercial world should have limited rights in relation to limiting freedom of creative expression - our culture has been enriched by a history of risk taking, diversity and law breaking, and the commercial world is utterly dependant upon the artist taking these risks, something that they would never do themselves.

I would like to know of a time when the artist has not been drawing from the past. The only difference now is that format that we use involves duplicating and arranging previous forms... for at least 50 years artists have done this.

It is our own personal and moral obligation to decide for ourselves what is the decent way to act in terms of how and what we reflect upon as artists, and I for one only appropriate content if it is transformative, and also would never steal "private" (ie unpublished) property.