Dr Joey Only is in the house 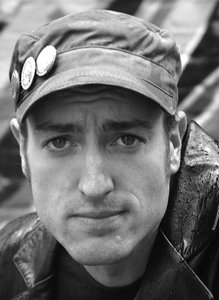 Dr Joey Only is in the house
Vancouver’s genuine adventurous punk rock country boy and underdog, our Stompin’ Tom and Hank Williams rolled into one, had to be interviewed. It wasn’t death threats to us really but a message he left on our myspace about getting no press in Vancouver... “Maybe I’ll just hold Usinger hostage with a stapler or something to get an article...and just pray like hell the mounties don’t have taserz.”

Skinny: What have you done in the last year? I know you played the Calgary Stampede, what craziness have you gotten up to?

Joey Only:The last year has been crazy, I still manage to play 80 shows on the road every year or more! If Vancouver only knew...
We toured with Saskatoon’s rockabilly legends Five Star Homeless last summer and did 18 shows with Washington’s Bob Wayne and the Outlaw Carnies. Bob Wayne is one of Hank III’s best friends so that was a special trip for us. My liver still hurts.
We headlined at Artswells and Robson Valley Musicfest and in winter we headlined the Snowboot Ball in Smithers and later Blizzardfest in Rossland. We did an 8 show tour in February which paid great but ended in a terrible car accident on Hwy.3. Shortly after that I went to Ontario for Warren ‘Spider’ Hastings funeral in Belleville Ontario where I played my infamous song in his honour ‘Spiderland Punkfest’. Then we closed Geoff Berner’s awesome CD release show in Vancouver the next weekend.In April I returned to Ontario with labour legend Anne Feeney for 8 shows and went to Halifax with Kingston based band Liqourbox.
I did 10 shows with Australia’s amazing alt-country band the Re-mains through to Alberta in June. Recently, I climbed 5 mountains with Todd from Rebel Spell and the next week did a tonne of sets at the Palomino during Calgary Stampede. The Palomino bar staff voted us ‘craziest band to ever play there’.We got to party with Washboard Hank and Fred Eaglesmith’s band and all our musical friends in Alberta. I been having the time of my life. Next up I get to play bass for Traveler this summer on their festival circuit.

S: You play covers as well as originals and you told me your philosophy about covering someone else’s song and can you tell me again?

J: I often say that the tradition of folk/roots music is something that should be kept alive. So there have been numerous examples where I have pulled out other peoples‘ songs to teach them to others. I often teach workshops at festivals on the history of radical folk and labour music. But these days I am starting to feel so empowered by my rockin line-up and all these dozens of bad-ass songs I’ve written that I don’t want to play anything but songs of my own pen. The person who really set me straight on that one was Bob Wayne, he never plays a cover...except maybe a Hank III song but only cause Hank recorded one of his. When I played telecaster for Bob Wayne on that tour I had to learn hours of his originals!

S: Is activism as big a part of you as music? What causes do you take up?

J: For a long time my music was very activist based. There are several reasons why that has changed a little. Now I still say exactly what the hell I think, but I didn’t want to get labeled an activist singer any more because it was limiting my audience. Though I have toured with Anne Feeney recently where our audience was nearly entirely of the left wing, so it’s not like I have completely distanced myself from that world. But really...Last week we played a drunken corporate function at Stampede and it was great to see the look of the shock on their faces when they seen I really don’t give a fuck what they thought. We said shit that could get you lynched in Alberta. They kind of started liking it too because we are rowdy and are free but play really good country music, I think that can rub off on people. Freedom is our message, it’s the sick who need a doctor...I didn’t want to be stuck in the left...I want to broaden my audience beyond that. So we shit talked capitalism right to the faces of the corporate elite and all they could do was buy us more whiskey and dance harder. All in all, I found that the left on the west coast was fragmented and dysfunctional. I find the right wing Albertan’s are sometimes friendlier than my fellow anarchists which is disturbing. Sectarianism and lack of strategy made every thing I tried to do in activism here painful. Eventually when I had a pile of criminal charges on me and I was looking at two years in prison and didn’t feel like I really was supported...I stepped back a little and tried to just fight my charges and not garner anymore attention. But in case you are wondering, I am very much still an outspoken anarchist. For the past five years I been playing by MY rules, nobodies politics and no record labels control me.

S: How do you feel about the Olympics coming here to Vancouver?

J: Fuck em. I’m outa here. I don’t want to live in a policestate. I can’t say anything good about it. Their should have been riots here when the IOC was inspecting Vancouver in March2003, that’s when the battle was ultimately lost. It’s good that people are pushing against the Olympics so that some minor reforms can happen...but the battle is heartbreakingly lost. Yuppification and modernization have won again.

S: Who are the bands that you are playing with on the 23rd?

J: MAMAGUROOVE from DUNSTER BRITISH COLUMBIA has been boogieingdown at festivals across British Columbia and Alberta for 5 years, yet have only ever played one show in Vancouver. They host the Robson Valley Music Festival on their property in Dunster every August. They paint themselves up, they play loud, and funky and are politically savvy music brought to you by their french fry oil bus. They are the NOMEANSNO of the psychedelic tribal funk world, off the hook and intenselyimaginative. myspace.com/mamaguroovewww.robsonvalleymusicfestivalbc.com TRAVELER from TEMPE ARIZONA is like a gypsy fusion heavy metalarabic roots music explosion. Featuring Scott Jeffers amazing knowledge of traditional eastern instrumentation and his mathematical band rocking behind him; they are also often accompanied by a fire eating belly dancer. Traveler stole the show at Robson Valley Music Fest last year and are back in Canada this year to play some of BC’s best festivals. The best part of Traveler for me is I get to be their bass player this summer.

Skinny: What body part do most people comment on?

Joey: Could be my fuckin teeth, their crooked as a politician. Could be my sweet tats. I know Leah likes my chest a lot. I got eyes that change color like a chameleon. All in all, I think Ihave a great butt.

S: Do you have a personal favourite song and tell me about it?

J: If I had a favorite song I would probably stop writing. I keep believing each time I pick up a pen that I can do better than before. I’ve written 400 songs and more, many are now just scraps of paper with a tune I can vaguely recall. But I really like “ONE LAST SONG” lately, it always reminds me not to take things for granted because death comes like a thief in the night. I am becoming more honest and personal with my songwriting, I’ve lived a crazy life full of a lot of success but alot of pain. I’m still an underdog every where I go and a genuine adventurous punk rock country boy, these things fuel me in going forward.

S: Who do you get compared to most?

J: I been compared in the past to Woody Guthrie and Utah Philips alot...but I’ve continuously changed my approach. These days I hear more often that I’m a bad-ass version of Stompin Tom, maybe because our band is boot stomping country and we don’t sing about shit that happens in America. Of course, having a rare vocal range that can dip as low as Johnny Cash’s keeps people demanding I play his songs at every show. Music was always my thing. But until 2005 I never believed anyone would pay me for my songs. I thought I was destined to keep traveling around by thumb and playing at protests hoping to inspire something to happen in the world. I didn’t believe in myself back then, I had no direction in life and was very lonely. All I knew is I couldn’t sit inside playing away in the basement, I had to bring the songs somewhere. In the depths of my depression, which nearly killed me, the one point of optimism that never vanished was just that.If I kept playing music someday something would be forced to happen, that strange belief saved my life and gave me purpose.