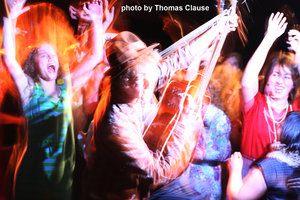 Tonight The Wise Hall looks like something out of an Elvis Presley movie: the young crowd in fancy dress appropriate to 50’s dancehall goers, as the best youth talent Vancouver has to offer comes together to give us a night of great entertainment.

I have to admit I missed Tigerhead and Ciaran Fanning due to a broken down bus, so I will start with Eric Campbell’s set. From the opening chords it was obvious that Eric is a born showman. Sounding more like a 40 year old on a 40 ouncer a day than a teenager (and that's no insult), he made his own songs and his covers stand out in performance. Pulling faces, stopping to drink mid song, changing tempo and linking almost his entire set together (retuning between songs became little jams in themselves) it was clear that he’s no stranger to the stage. It’s obvious Bob Dylan has made a huge impression on Eric, who even looks like him in his younger days, and no doubt the great man himself would have admired his reflection here.

Next up was The Bank Dogs. An early technical hiccup with mic levels was dealt with very maturely, which led you to believe that you were watching a band with more experience than their young appearance would indicate. There was some very good musical ideas and the lyrics I caught sounded like they had potential. Give them a few years and they’ll be really good.

The Naive closed out the first half of the show. These two left handed guitarists obviously share an understanding. Their music is fueled with teenage angst and there are crossovers with a Nirvana grunge style, however they add other musical ideas such as falsetto harmonies to their sound.

After the interval, Chelsea Johnson took the stage and, put simply, she gave one of the best performances I have ever seen! Her opening song was a capella, a very ambitious thing to do but one she pulled off exquisitely. At that point she had the room holding it's breath. Her performance had the vulnerability of raw talent but the finesse of an experienced performer. Between the songs she seemed quiet and shy when she joked about heartbreak, but strong and powerful when she sang, the two personalities producing a set you just couldn’t take your eyes off. Dynamics were used well throughout, expertly adding tension and release to her songs. Bitter-sweet lyrics of deep emotions connected her to her audience. She is definitely one who could go right to the top. A hard act to follow.

Out of all the bands at this gig, Stefana Fratila is the one who has had the most success around town. Her opening was timid, and she appeared conscious of the fact that her peers were attending this gig. But as she moved thru her set her confidence seemed to return and the performance improved. Stefana is touring Europe soon, a big step in her much deserved success as an artist. 'Vista Voyager' wrapped it up with Stefana switching to her third instrument of a short set, the Ukulele. By this point the crowd had started dancing and enjoying her 'out there' style.

Duo Connor Roff & Michelle Chan followed Stefana, with their keyboard and guitar acoustic set. Despite Michelle having a cold there were some nice vocal harmonies and overlapping lyrical parts.

The final band of the night were TheBeauties. They are definitely a crowd pleaser and their high energy music is mirrored visually by animated frontman Charlie Kerr. There are some good guitar riffs which get the crowd in the mood and an interesting cover of what I think was 'Love Lockdown' by Kanye West, but I'm not sure about that so don't hold me to it. All in all the night would seem to indicate that there is a very bright future for music in Vancouver, provided they don't all move to Toronto. Posted: Jun 6, 2009
In this Article Artist(s) Eric Campbell , Stefana Fratila, The Bank Dogs, the naive, CHELSEA JOHNSON, The Beauties Resource(s): WISE Hall