It Ain’t Easy Being Subhuman 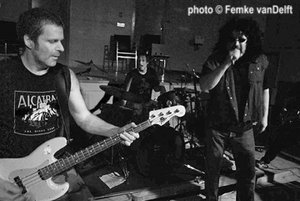 The venue shift for the Subhumans May 15th gig - from the Anza to the Ukrainian Hall (805 E. Pender) - returns the band to the scene of the famed 1979 Rock Against Prisons benefit, which also included Tunnel Canary, AKA, the female-fronted Zellots, and Rabid, featuring Sid Sick on lead vocals - the man who originally sang “Fuck You” with The Stiffs, a pre-Subhumans band with Mike Graham and Gerry Hannah. Clips of Rabid and Tunnel Canary's performances that night are viewable on Youtube.

The concert, organized by prison activists nearly 30 years ago, was one Goble was happy to participate in; he still is “against prisons,” he tells me. “The whole prison/ police thing - it’s part of a huge industry that fucks people up and creates more unrest in society and more of a feeling of lack of freedom than people would feel if it didn’t exist,” he says. “There are a lot of people who are addicted to prisons. They don’t know how to function in normal society outside of prisons, and they’re in and out all the time. They’re probably happier in prison. To me, it’s like a big nursery or kindergarten that just takes people and makes them incapable of interacting in civilized society in normal ways.” While he agrees that murderers and the like should be separated from society, Goble feels there are far too many people behind bars. “There’s gotta be a better way,” he says.

Guitarist Mike Graham remembers the 1979 gig as a “pretty chaotic show. There were a lot of people there and Brian kept getting pulled offstage. At one point, there was some broken glass on the ground and he got his hand cut up. He made it through the set, but he had to go for stitches to the hospital afterwards.”

Goble only has dim memories of that event; Gerry Hannah has none whatsoever. “I remember the time when Brian got hauled offstage, had all his clothes ripped off him and got thrown back up onstage completely naked,” he chuckles, “but that was at the Laundromat,” now Richards on Richards.

Episodes like these seem to follow the Subhumans around like a cloud of hungry flies; since the band reunited in 2005, one show at the WISE Hall had to be shut down due to a fight that erupted. Thuggishness in the pit and ‘Quincy Punk’ posturing were one of the reasons Gerry Hannah originally left the punk scene in 1981. “I was getting really tired of it,” he says. “That’s when it became dangerous for women to be in the moshpit, is right around that time. Prior to that, any young girl could go to the front of the stage and dance with the dudes and there was no trouble. If somebody got knocked down, somebody would help them back up right away. Nobody was deliberately going in and elbowing people or smacking somebody to see if they could get a fight going. It just wasn’t happening.”

Hannah, of course, is a vocal critic of hyper-masculine tendencies, having written two songs that critique testosterone-driven excess: "Mindless Tough Guy Act," about "a swaggering macho person" - not himself, he notes - "who is so terrified of their weakness showing and maybe their feminine side showing that their whole life is a lie and a disguise, and they actually end up hurting people and screwing people around because they’re so into their denial;" and, more famously, "Slave to My Dick." That song is based on Gerry's observations of men who "were so desperate to get laid that they would try and emulate Lifestyles of the Rich and Famous and impress people with flashy material things, which nauseated me. But at the same time, the song was recognizing this basic biological need in all of us" -- including himself, he admits. "I would spot some really exotic looking woman at a gig and go with her and friends to some stupid party that was totally a bore and not my scene at all. But there I’d be, hanging on desperately in the hopes that it would turn into something. And 95% of the time, it wouldn’t - it would lead to a hangover and me walking home later drunk in the dark going, ‘What the hell did I do that for?’ The song was recognizing that there’s a little bit of that mindless jock that will do anything to get laid in operation in all of us."

"No one is a saint," Gerry continues. "We all have our weakness and our foibles and to a certain extent we all buy into mainstream culture. The important thing is to be aware of your contradictions. Not necessarily to trash yourself about them or beat yourself over the head, but just to be aware of them. That’s where things get really screwed up, is where you’re in denial about your contradictions and weak spots.”

The setlist for the May 15th show - a CD release for the Alternative Tentacles compilation of the Subhumans' early singles and EP, Death Was Too Kind - will include most of the songs on it (the title track, "Slave To My Dick," "Fuck You," "Oh Canaduh," "No Productivity," "Death To The Sickoids," "Firing Squad," and "Inquisition Day") as well as some less-well-known older material, like the seldom-heard Hannah composition, "Look At The Dawn." The last song he wrote before leaving the band, Gerry says it's "a response to the apathy" of the Reagan years, telling listeners to "look at the light, look at the truth -- don’t hide in the shadows, don’t hide under the covers; look at life instead of hiding behind whatever it is you're hiding behind - if it’s alcohol, or your job, or your middle class lifestyle, or your kids. Stop hiding and get out and look at what’s actually going on and do something about it!" Posted: May 5, 2009
In this Article Artist(s) The Subhumans Resource(s): The Ukrainian Hall