King Khan and BBQ/ Dutchess and the Duke 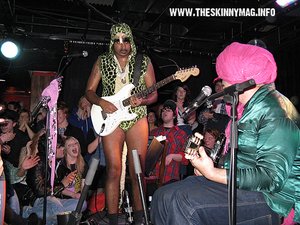 Even after waiting at least an hour in the rain rain rain for tickets with unprepared friends, I just couldn’t be grumpy with two great bands about to grace my eardrums. The lineup to get the (just 50!) tickets at the door was around the corner, record stores had been out for days, and there were tears from the back of the line. The Biltmore was packed to the gills, with barely room to put your glass to your mouth and it was too dark to find your friends once you lost them at the bar. Everyone was damp, hot and sweaty. If you didn’t want to get close to your neighbor, too bad pal! And if you wanted to casually touch someone’s ass, well, lucky you!

Seattle duo Dutchess and the Duke took the stage in appropriately dark lighting, crooning their pared-down country-tinged garage songs. The grizzled guys that sit alone at the bar and order whiskeys heard this band and traded their cowboy boots for beatle boots. Dutchess and the Duke navigate between garage rawness and guitar sounds, and the tragic bleakness of folk and country effortlessly, making it appealing and danceable, even. Their song, “I am a Ghost” was great! One for the lovers to sway to, and for the lonely to find a lover to sway with. They finished out the song with just vocals, a bit off harmony in a charming way. It was haunting, but not hopeless. For those who were there to hear a lot of fast electrics, it might have been off-putting, but I enjoyed every song. The two (girl and guy, obviously) played guitar, with a percussionist who had a bass drum, a well-used tambourine, maracas and more. The guitars made the bulk of the sound, a good vamp-up for KK and BBQ. And in typical Biltmore fashion, it was LOUD! Just when everyone felt it might be time for Gram Parsons to play next, Dutchess and Duke were over, and somehow even more people crowded the stage in anticipation.

King Khan and BBQ are true showmen, you expect a bit of a spectacle when they strap on their guitars. And it was an extravaganza indeed, partly supplied by the crowd, and headed by an ugly Diana Ross and a Swami (KK and BBQ, respectively). King Khan stands, BBQ sits, playing guitar as well as tambourine and bass drum. After the first song, the weaklings were weeded out and I saw people go streaming from the middle of the crowd outwards, their spots promptly taken by more daring (or more drunk) patrons. People were attempting to crowd surf, leading to King Khan asking us to remember what we came for – “a dance party or a Limp Bizkit party?” With all the reverb KK and BBQ were throwing around, the choice was obvious. It was rowdy all night long, with King Khan egging the audience on and the crowd all over the stage. There was, of course, the prerequisite gaggle of girls gathered around King Khan. The more BBQ-tinged songs (“Treat me like a Dog” “Fish Fight”) sounded the best to me, with their jukebox feel. King Khan’s songs are better for the bedroom, slower and more soulful. I’m sure there was a young couple in lust fucking in a dark corner somewhere, the soundtrack provided in extreme decibels. If you wanted a soundtrack for ass-shaking, shimmying, twisting, or thrashing, you could find that too. It was a dirty, mildly inappropriate, unstable, but stimulating kind of night. Kind of like King Khan and BBQ themselves. One of the best shows I’ve seen in ages. Posted: Nov 24, 2008
In this Article Artist(s) The DUTCHESS and the DUKE, King Khan and BBQ Resource(s): Timbre Concerts, The Biltmore Cabaret