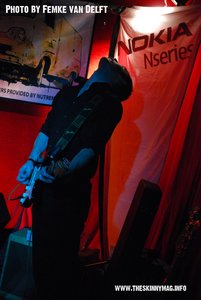 This night had a definite New Wave feel to it. A draft choice of late 70's and early 80's influences was bandied about. Streetlight, a four piece of bass, drums, keyboard and guitar opened with a sound which, at times, sounded a bit Depeche Mode-like. There's a dance structure to the material. There were some interesting chord changes but, for some reason, I found it a bit indistinguishable. Perhaps I need to listen to their material again to have a more rounded opinion of it.

Call The City are a female-fronted four piece that are a bit difficult to pin down. Definitely Punk/New Wave influenced. They sort of bring to mind acts like Souxsie & The Banshees, maybe early Blondie, but that really doesn't stick. The guitarist employed some intriguing shades to flesh out the songs. From flanged bass chords to an almost Bauhaus like atmosphere. The drummer was going at the cymbals like his drumsticks were the hind legs of a jack rabbit.
They had some good, fast, punky numbers and fair variation in their material. But I felt their songs could be fleshed out a bit more.
The Parlour Steps were definitely my favourites of the night. Their material offers a huge breadth of influences and highly individual song structures. Their music is artistic yet accessible. Not an easy task to pull off. They have been compared to such groups as The Pixies and Arcade Fire. I think you can add XTC to the list, as their songs are well-written and very intelligent with lots of variation, colour and soul to them. From the march of "Only Mystery", to the dancey groove of "Hot Romance", to the Tom Waits-ish stomper "Thieves Of Memory", to the behemoth dynamics of "Gargoyle’s Passion" with its waltz-like glide, to their new material which introduced a bossanova feel and some lovely harmonies from bassist Julie Balavis (also with El Dorado), and former Feminists keyboardist Allyson Mara.

Parlour Steps finely demonstrated their huge musical arsenal. Not sticking to one form of music or particularily conforming to any current trends. A fine drummer too in Rob Linton, with timely fills by Rees Haynes and imaginative songwriting from Caleb Stull. Parlour Steps are easily one of Vancouver's most impressive acts.

Sex With Strangers music is more synth based. A definite 1980's and Euro-disco core to it. But they're not completely synthetic. They do use live drums, bass and guitar. I have to admit I'm not the biggest fan of heavily synth-driven music. But they do have their moments. The theme of their music brings to mind a constant struggle within society. Wondering whether it’s best to go for a life based on the more artificial and shallow, or one which offers something less glamourous but more tangible and soulful. "The Dance Police" and "Take Back The Night” are songs that caught my ear on first listen. I do regret not getting to stay to see them perform. Our wonderful Translink system brings to mind the first mentioned song’s theme. Sex With Strangers are at The Bourbon on January 17th.