Nearly Famous Music Festival at the Red Room and the Royal Unicorn Cabaret, 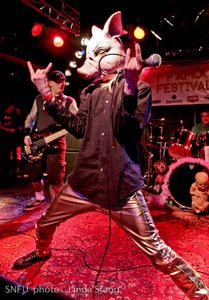 What was supposed to be a review of one show has been altered by restless feet and a desire to see a couple of shows if possible in one night. Canucklehead punk veterans SNFU pinned the audience to the mat at the Red Room as ringleader Chi Pig breezed on to the stage in a spectacular gold lame suit and a tickle trunk of disturbing props (ie a one-eyed doll baby) to emphasize the cheeky humour so prevalent in the songs. Staring 50 in the face, Chi is still vocally a force to be reckoned with. With impish grin intact, he wasted few opportunities to let the kids take over on the choruses while playfully berating everyone, and punk rock fans wouldn't want him any other way. The band, actually composed of the guys who backed up Bob Dog not too long ago, wreaked a steady sonic blitzkrieg that unfortunately was at times a little lost in a midrange mung, which put a minor blemish on the energetic and propulsive set. Much beer was drunk and spilled by the exuberant crowd of (mostly) moshing twentysomethings who must have been but babes in arms or even a dirty thought in their parents' heads when "…And No One Else Wanted To Play" came out wayyyyy back in '84. SNFU did not hesitate to give this second generation to hear their stuff a rollicking musical history lesson on this occasion.

Retreating in good order out into the street, a brisk walk up Pender Street into Chinatown led to the peculiarly named Royal Unicorn Cabaret, where local four-piece Hefe had just finished their set. Next up were the Defektors, and they did not disappoint. With a moniker that recalls numerous similiar-sounding band names and record compilations in that fuzzy melding of punk and New Wave of late 70's Britain, the Defektors eschewed the comforting but usual three chords and politically explosive lyrics typical of that time and place for yelpy enigmatic vocals over a jagged dirty bass tone mated uneasily with cranky Fripped out guitar stablines as the drums meted out a minimalist tom-happy tribal foundation. Few songs exceeded the two and a half minute mark, and the band had a truckload of them. A pleasant surprise for a band the reviewer has until now only heard about.

Following the Defektors, local 60's garage mutants the Fiends belted out a bevy of chanty compact organ and Rickenbacker- boosted fuzztone-saturated ditties about favored brands of cough syrup, Jack the Ripper, park perverts, zombies demanding respect and a brace of other Coaltion For the Family-approved songs for boys and girls who love to sing while digging graves out in the back yard for Mom and Dad. These ghouls have been at it since before the dawn of time, and are always not only hilarious but rock it so good now that they have been playing a lot more shows. Not a bad haul at all for one night of live rock and roll. Posted: Nov 24, 2008
In this Article Artist(s) The Fiends, Hefe, Defektors, SNFU Resource(s): The Red Room, Royal Unicorn Cabaret