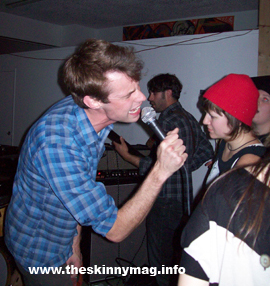 Low-key promoters Negative Nights always set up the best shows, even if they don’t happen often enough. Seeing Lover!, out of Memphis, at the Sweatshop this weekend was more proof of NN’s ability to make shows happen that get everybody dancing and sweaty. I saw more people making out than at a high school house party. More evidence that good garage gets the hormones raging!

Dead Ghosts headed the evening off with a bit of a rough start getting everybody playing the same song. Once they got started, the boys tore through their jangly lost-in- the-woods-but-still-gunna-dance garage tunes. The crowd arrived drunk and rowdy, and the more the boys played, the hotter and crazier it got. The floor of the Sweatshop was shaking so much I though we might all fall through in a heaving mass to the skate ramps downstairs. The crowd got chastised to “back the fuck up” while the boys continued to play what they later told me was their “sloppiest set ever” as kids were dancing without leaving the Ghosts enough room to play properly. I thought it sounded great though! In fact, their set had the best sound of any band I’ve ever seen at the Sweatshop - I could actually hear the vocals. Their song “What to Do” sure is a party anthem, makes me go wild every time! They played a new song too (I think), something about “got what I need,” anyways, that’s a goodie too. Don’t pass out the chance to see the Dead Ghosts if you like good times and Phil Spector.

B-Lines came on in full force tonight. There was floor rolling, beer fights, spitting, broken eyeglasses, stomped toes, and trouble on the dance floor too! The lead singer yelled, “I invented punk,” and with a performance like that, I almost believe it. The tall, gangly band was way more aggressive then last I saw them, and I like it. They were using their instruments and the mike stand like weapons, threatening the crowd and playing loud and sharp.. The B-Lines can play their whole catalog - a demo tape and some scattered singles – in one show, and still clock in under a half-hour. Punk rock, indeed. Their new songs sound great, both live and recorded. I’ve said in these pages before, but this band is just the right mix of classic sounds and some magic noise I can’t describe that should quiet all the naysayers out there.

Lover!, a solo project with an ever-changing backup band, finished out the evening with psychedelic visuals behind them. They played a delightfully guitar laden poppy garage set with lots of oh-oh’s and some southern twang too. This is the band I would have played at teenage slumber parties. The longer they played, the better Lover! got, saving their best songs for last. I actually like this band quite a bit, but this night, the local acts outshined the headliners. By their set, though, the amps were fucked and we could barely hear the vocals, so maybe it wasn’t their fault. They were more outrageous when the played a couple months back at Pub 340. The band was super tight though, and the bad sound didn’t stop me from buying some 45’s. Support local bands, support poor touring bands, support Negative Nights, support garage punk. The end. Posted: Oct 27, 2008
In this Article Artist(s) B-Lines, Dead Ghosts, Lover! Resource(s) The Sweatshop, Negative Nights