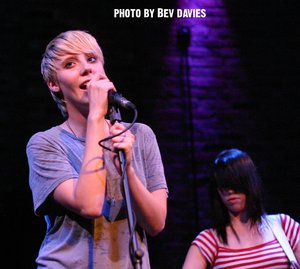 The sparse crowd was bewitched by the androgynous shrieking of White Lung’s Mish. As our ears would testify, there may have been no sound check and we were all forced to pay for that listening to the raw energetic set. And then we waited with only White Lung’s merch to keep us entertained. Nice shirts BTW.

A few hours behind schedule Crystal Antlers and Fucked Up rolled in having been saved by a soul on a skateboard that went for gas when their converted vehicle’s tank ran out of vegetable oil and their calls for help to Nardwuar were futile. Nobody knew where 99th and Park was.

Once the bands finally arrived and methodically dumped their merch on the way to the stage it wasn’t long before bass player Jonny Bell was leaping around said stage, identifying himself as the heart of Crystal Antlers. Hypnotized by yet another band from Huntington Beach California, their set was over far too soon.

One doesn’t have to wonder where Fucked Up got their name. The jovial Father Damian aka Pink Eyes exploded onto the stage announcing how happy the band was to be there and letting the audience know that they were already doing much better than their last visit to town. As Father D bantered with the crowd about his long distance relationship he took one step too many and toppled into the crowd. Quickly hoisted back on the stage undaunted by the evening’s events, he was right back on top of his game roaring and snarling at the crowd in full force. An intense night of music despite the f***ups. Check the CITR schedule for Nardwuar’s detailed interview with Toronto’s FU. Posted: Sep 22, 2008
In this Article Artist(s) White Lung, Fucked Up, Crystal Antlers Resource(s) Richard's On Richards