Interview with Dusty from the Hits 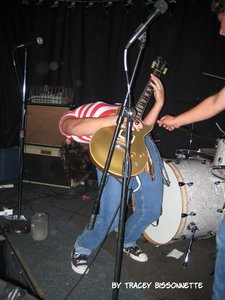 We have lots to talk about because The Hits have been one busy band. First off, can you introduce yourself and the band and their instruments. Why no bass?

Alright, well, I am Dusty and I hit stuff really hard and sing a bit, Lou Slips sings and plays guitar, and Kyle Riot lays down the precarious guitar solos and sings a bit to. And we are the Hits. Why no bass? Well we had a few bass players back in the day and the last one quit two days before a show at the Railway and we didn't want to cancel so we just played it without him. It was the best show we had ever had up to that point and it just made sense to leave the band with what was working. Besides Steve Chase told us it ruled without a bass and that was good enough for us.

How did you get together? You guys look so alike, and dress the same on stage, c'mon, highschool buddies or brothers?

Um, well, I am a late comer to the band. But Lou and Kyle have been buddies for years and they started the Hits when they were still in school, although back then Lou was on drums and Kyle played bass... but you didn't hear it from me. I joined up around two years ago. I knew about the band cause I used to play in a band with Lou's brother a few years back. When I heard they needed a drummer I volunteered cause I knew it would be fun. As far as dressing the way we do... Lou has always dressed with jeans and a leather jacket and it just made sense to have the band wear matching clothes to make us stand out from all the other bands. And now it is pretty much all that we wear. You can't go wrong with jeans and a white t-shirt with a leather jacket.

How did you get the Hives/ Donnas gig at the Commodore? That must have been incredible to play.

We actually got that gig cause the Hives just called us on the phone and asked. We partied with them a few months earlier in Seattle and we exchanged emails with them. I joked about us opening for them on a tour and well I guess they dug our music and the fact that we were just about as cocky as they were and so they wanted to experience the Hits first hand. So they called us from New York and asked if we wanted to play. It was funny cause we had already bought our tickets to the show at that point cause we only got added to the bill two weeks beforehand. I think that will be the only time we buy tickets to our own show.

The Hives are rad. You always wonder what a band that you look up to is gonna be like when you finally meet them and they where great. Super down to earth. They still have that cocky stigma about them backstage but I think for them it is more of an inside joke offstage. Which is why we got along with them so well cause we are kinda the same way. We just go back and forth talking about how our bands are the greatest in the world. The thing with the Canucks actually was kind of our doing in a weird way. When we first met the Hives in Seattle we had talked about playing a game of hockey with them next time they passed through Vancouver. They actually tour with hockey gear on their buses! Anyways a buddy of ours met a girl at a party who was a PR person for the Canucks and he was able to get it arranged for us and the Hives to get an hour of ice time with the Sedin Twins and Alex Edler on the day of our show with the Hives. I didn't end up skating cause I was to stressed about the show that night and so was Kyle but Lou he got right in there with a pair of skates that where about 80 years old. Seriously, it was the greatest thing ever, Lou skating around with his tight ass jeans and leather jacket on. There is a hilarious video of him on youtube trying to take a pass from Daniel Sedin and bailing so bad. I think me and Kyle lost a couple of pounds we laughed so hard. But our show went well and we had a great time playing rock stars for a night. A cool side note to this story is the next night Lou went with the Hives to their Seattle show and ended up meeting and chilling with Sonics singer Gerry Roslie. Lou and the Hives where just sitting around Gerry all night listening to tour story after tour story. He said nobody said a word, they all just listened. Even Pelle was quiet.

Which band was better at hockey?

Um well considering Kyle and I mostly watched and, seriously, have you ever watched Chris Dangerous play the drums? Chris and Nicholas where actually really good. So I will have to go with the Hives for this one.

And the Donnas? What were they like to meet?

Um, the Donnas were pretty cool. They were a little more rockstar-ish then the Hives. But during the Hives' set me and Lou and the Donnas were partying it up sidestage together. Let me tell you those girls can drink... yeesh. For the most part they stayed in their dressing room, but they where nice.

Okay, bloody tour stories... how was your tour? Where did you go and how much money did you lose and what happened to the tour bus. Something always happens...

Our tour was an adventure for sure. We played some good shows and some empty shows. The best part of our tour was the epic game of "BALLS". The scariest part would have to be the massive hailstorm we got stuck in near Thunder Bay. Let me tell you hailstones the size of golfballs are no joke. That shit is for real. We drove a rad bus called the HO BUS and she was a ton of fun. Until Manitoba where she broke down the first time and we were forced to get a hotel in Portage La Prairie. Once she got fixed she made it as far as Sudbury Ont. which is where the tranny blew. We rented a cube van to get to our next show in Toronto at the Bovine and we chilled there for a couple of days with our pals The Februarys. Once Monday rolled around and we talked to the mechanic we realised MOJO was a goner. We had spent over $3000 and we had no more money. So we loaded our gear on a greyhound bus and flew home. Two things we learned while on tour. 1) a bus is rad cause you don't have to pull over to piss, just open the bus doors and hang on for dear life( thank Elliot our roadie for that one) and 2) there is the best BBQ in the country right between Thunder Bay and Sudbury called Busters. Worth the 14 hour drive. It was so good Elliot forgot he was a vegetarian.

How was Pemberton? That is incredible that you played such an awesome show. When did you play and did you meet anybody famous?

Yeah Pemberton was alright... hehe. It kicked ass. We kicked ass. We got to play at the Beer Garden right after Tom Petty played at 11pm on the Saturday night. We ended up playing in front of about 8000 people. We tore it up, and left them wanting more. Which meant we got a well deserved encore. As far as famous people where should I start? The main person that was cool would have to be Andrew Stockdale of Wolfmother. Me and Lou snuck into the backstage lounge that had an open bar and we drank free Heinekens and whiskey and talked to Andrew for about 2 hours. We met all sorts of other "famous" people but none where as cool or worth mentioning as Andrew. But it was cool just to get to go and be a part of it. Helluva good party!!!

Your album is awesome, I have it and it is on heavy rotation at my house. Who writes the music and who writes the lyrics?
Any plans to record a new album?

Hey, thanks, glad you dig it. Lou writes all of the lyrics and the musical side of things usually starts as a riff or jam from either Lou or Kyle and then we all write it together. Just trying various parts out and jamming on stuff ‘til it starts to sound good. Lou also plays drums so it is cool to get his input on drum parts every so often. As far as a new record is concerned we have done some demoing and we have been talking to Jay (Solyom of The Spitfires) who engineered our last record, about recording again late this year. Ideally we would like to have a new record out in stores by late spring.

We are looking forward to your show at the Rail on Sept 13th with The Parallels, The TVees, and Pretty Vacant.
Any other gigs up your sleeves?

Man, I am stoked on this show. It will be the second show that I am putting on personally, and I really dig all these bands. It has been almost two years since we have shared a stage with the Parallels and we are really looking forward to it. We also haven't played in town for a couple of months which is the longest we have gone without playing in town in years. As far as our next show... We are really excited to be joining the Starlet Harlots Burlesque Collective in putting together a special Halloween weekend show. The Tits vs. Hits Halloween Tour is going to do a couple of dates on the island and we have saved Halloween night for Pats Pub. It is gonna be a night of rocknroll, b-movie horror and lovely ladies. And of course there will be games and costume contests galore. Pats Pub will definitely be the place to be on Halloween night!