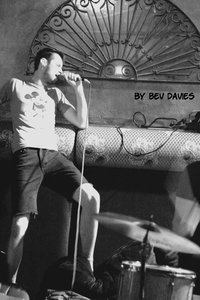 I was shocked at how many people filled Honey Lounge to see the B-lines and the Defektors off on their tour of the West Coast, especially since the club is usually reserved for dancing college kids. The night started off with two new bands to the scene. Dichotomy played fast , thrashy, straightforward punk rock. Four kids in the band, a girl and a guy shared the screams, though it was mostly the girl providing the vocals. For such a little thing, this girl sure was noisy! There was also a lady on drums, at times pounding so fast I couldn’t even see her sticks. I was told this was only their third show, but they already had a crew of fans at the front of the stage.
Following Dichotomy came the other new band, playing their first live show – New Values. These clean-cut fellows may be new, but they were so tight! The three-piece launched relentlessly into one song after another of catchy, upbeat and fast punk. The bassist and guitarist both sang, changing up the feel. After one particularly good song, a friend and I looked at each other with wide eyes. An unexpectedly fun band! They did a Bad Brains cover (I think?), and though I’m not one to draw comparisons when trying to describe a band, I can’t help but mention the Wipers here. I’ll see these boys again!
The B-Lines came on next. I gotta be honest here – they were the best behaved I’ve ever seen them this night. Normally the lead singer and the rest of the band are all over the place, causing mayhem and trouble. I don’t know if it was the ambience of Honey that kept them playing safe, but it was not the best time I’ve seen them. Even still, their songs get stuck in my head for days. Somebody put out their record already! The B-Lines finished their set with “Social Retard.” Great song!
Rounding out the evening was the Defektors. I don’t know what it is about them, but they just capture my attention so much when they play. I couldn’t write anything down, all I could do was listen and dance. Again, the crowd were not nearly as rowdy as I expected, but being out of your element can be disconcerting. Someone bottled teenage boredom and gave it to the Defektors. How does it feel to be an angry kid from the sticks coming to the big city to get a shit job and follow a girl? Aggressive without being harsh, memorable without being saccharine and loud enough to annoy your neighbors. The boys finished their set with “Burning Light,” their song on the Emergency Room comp, and also rumored to be on their single to be released sometime soon. I’d be shocked if the rest of the West Coast didn’t eat up these bands like Vancouver does. Posted: Sep 8, 2008
In this Article Artist(s) dichotomy, The New Values, Parallel Lines, Defektors Resource(s): Honey Lounge