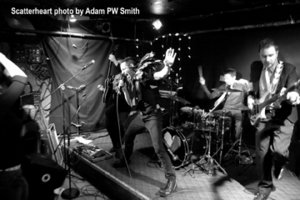 There aren’t a lot of modern rock bands running around spouting an ethos of love, harmony and goodwill toward one other. In a market where the gloomy, aggressive or just plain aloof is king, you wouldn't think these kinds of happy cuddly ethics would be practiced with such shameless abandon. But Scatterheart is a different breed of band. Formed in late 2006, Doug Fury, Wes Deboer, Mike Southworth and Jesse Enright are a group of love-rock revolutionists that have their sights set on your heart and soul - and they won't let up until you're given into the good vibes.

"I wish there were more bands out there putting energy into having fun. I mean, we're a serious band but we're serious about having fun!" Jesse informs me as we sit down for a lunch and chat at Cafe Deux Soleils on a sunny Monday afternoon. "It's about liking yourself," he continues, "You're not serving anybody by making yourself smaller than anyone else, so you may as well love yourself as much as you can and live large while doing so. We get up on stage and it's like an explosion of love and what I want people to get out of the show is a bit of that self love."

"Love doesn't have to be some wimpy, smooshy thing. It's energy. It's movement. It's stronger than anything and i want people to feel empowered." Coming from anyone else I might think they were taking me for a ride or living by false pretense, but Jesse and I have a bond that's ten years strong, and I buy every word of it.

Scatterheart is a forward-moving hard driving vehicle with LA glam-rock sensibilities, complete with punchy shiny-serpentine guitar and soaring vocal dramatics. The beautiful theatrics and over-the-top showmanship are the typical with these love-rock peacocks, and with Jesse at the helm busting out headstands with his feathers asunder you really get the sense that you're part of a spectacle. A mad rocknroll cabaret of psychedelic amore, if you will.

"Remember the bad guys in The Road Warrior, all those bad-ass punk guys? Well imagine if they all took ecstasy and had a house party. We'd be their house band!"

I steer the conversation towards the future and what's coming up for the band, as I’m to understand a new album is almost in the can and looking at an end-of-August release, which can only mean some upcoming tour-dates for all you lucky love-hungry masses, and from where I’m sitting Jesse’s excitement is palpable.

"I think the recording of this new album has been a huge high point for me. Watching how we've grown as a band. Even seeing that we actually ARE a band that works really well together and that musically we get along well enough that it’s at the point where I can't really remember who wrote what parts of the songs anymore. Everyone seems really happy and comfortable with their instruments. And so this new stuff, to me, is better than I ever imagined it to be. It's different than the EP, for sure, in that we've stripped down the sound quite a bit. That big massive rock guitar has been lessened and the vocals are more natural. It's so easy in the studio to over-layer and sort of hide behind studio wizardry, so the whole of the band just decided to make a less glossily produced album to see if we could woo people with just our natural sound without hiding behind anything."

Jesse assures me though, that the love and feathered wings are here to stay.

And so with all this talk of love and honoring yourself, feathers and good feelings, one might wonder how they pull off their crazy disco-punk-rock theatrics without attracting negative feedback. Personally I think people appreciate a band that is doing something a little more daring and gleefully shameless in its ethics and throwbacks to days long gone. And, well, they’re a really talented and dynamic band. You can’t help but NOT dig their bombastic celebratory offerings of love made music.

“I’m so tired of music that’s supposed to be “cool” and musicians that act bored or careless about what they do. I think it’s pretty badass to learn how to play your instrument well, or learn how to sing well. To actually craft a song that will stick in people’s heads because you’ve injected real emotion, thought and feeling into it. To me that’s much more daring than growing your hair long, plugging into your distortion pedal and playing “bad-ass” aggressive music.”

Watch the skies kiddies, because a revolution is coming to town! Posted: Jun 29, 2008
In this Article Artist(s) Scatterheart