The Restarts, Fear of Tomorrow, The Rebel Spell, System Shit and Spectres 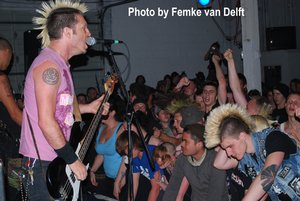 I walked into the dimly-lit Sweatshop to catch the tail end of System Shit’s wonderfully sloppy set. Who would have thought that a punk gig would start at 7pm? Fear of Tomorrow hit the stage and began to sonically pummel me into a bloody pulp; pretty amazing for their first show. I couldn’t really make out what Foat was angrily screaming into the mic, but he had that long blonde hair that most women would kill for. Next up, the Spectres, who played a very different yet passionate set, an interesting blend of Joy Division and The Four Skins. I call it “Oi-Joy”. Spectre’s full band name, A Spectre is Haunting Europe, is taken from the first sentence in the Communist Manifesto.

Three bands into the night and still no participation from the Knox-Gelatin-studded crowd until The Rebel Spell hit the stage. Not putting “The” in front of Rebel Spell is as bad as leaving out “The Legendary” in front of DOA. Their incendiary first release, Expression in Layman’s Terms, is one of the few albums that I’ve been listening to since I was 15. It took all my self-restraint to not dash headlong into the pit and flail to my little heart’s content. They played a furiously short set, leaving me wanting more.

With every band hustled quickly off the stage, I began to wonder if the Restarts had a curfew. It turns out these veterans needed three times longer to setup. The band hails from England, playing arguably a watered-down political/hardcore street-punk with all sharing vocal duties. The set opened with their spitfire drummer barking out lyrics like a drill sergeant. Too bad it was only one song. This energetic band fed off of the brave critical mass of the crowd. Hats off to anyone who would stage-dive in front of the biggest fucking security I have ever seen. What’s with those thick black leather gloves? Posted: Jun 29, 2008
In this Article Artist(s) The Rebel Spell, Fear Of Tomorrow, System Shit, The Restarts, spectres Resource(s): The Sweatshop