MOTHER MOTHER: Word From Your Mother 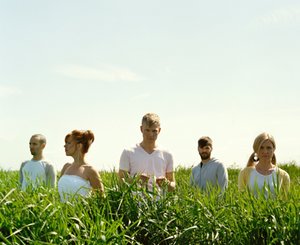 In the past year, Mother Mother have appeared alongside such acts as Spoon, The Killers, and Metric, and been hailed by celebrity blogger Perez Hilton as “the most exciting band coming out of Canada.” For singer Ryan Guldemond, however, success remains a relative term. “Fuck, we’re still working stiffs for sure. So I guess that’s the goal, just to eradicate the day jobs. We’re not too, too far off, but still…” Trailing off, he concedes, “There’s still a real sense of insignificance.”
I spoke to Ryan a few days prior to the band’s June 22nd concert at Gastown’s Maple Tree Square, the band’s third appearance at the annual Vancouver Jazz Festival. The singer/guitarist is still basking in the afterglow of the band’s latest recording sessions, which took place over three months (February through April) and produced what is to be Mother Mother’s sophomore album, O My Heart, due out September 16th on Last Gang Records.
“The title track, ‘O My Heart,’ is about a fish, which is symbolic of one’s heart being out of water, out of its element,” he reveals. “There’s definitely a fish theme brewing.” Laughing, he adds, “The cover has a big fish on it.”
The band has a lot to live up to on O My Heart, considering the overwhelmingly positive critical reception they received for their first album, 2007’s Touch Up. On their debut, Mother Mother exhibited a clear case of stylistic ADHD, genre-hopping between rock, folk, 60’s AM pop, country and hip-hop – and often all within the same song. This spastic sound was partly due the fractured nature of the recording sessions: Touch Up began as a collection of acoustic home recordings, performed by Ryan, his sister Molly, and their friend Debra-Jean Creelman. The trio’s recordings were then later overdubbed with drums, bass, and other instrumentation.
“To me,” Guldemond reflects, “I listen to that first record, and it sort of speaks of that dynamic more than it does of a band. It’s like a collection of songs sung by three people, with different production and instrumentation and performers supporting it.” Now, with a permanent 5-piece lineup, including Ali Siadat on drums and Jeremy Page on bass, Mother Mother entered their latest recording sessions with a new sense of purpose. And as with Touch Up, the album’s sound reflects the circumstances under which it was recorded..
“In comparison to Touch Up, we definitely had much more of a game plan that was discussed in pre-production meetings, and stuff like that, so yeah, it definitely felt like a group project. It’s more grounded in a specific sound. I think it sounds more modern.”
As well as recording with a new lineup, Guldemond had to contend with the knowledge that his songwriting will be closely scrutinized. Unlike Touch Up, which was recorded when the band were relative unknowns (“We were barely even an inkling of an idea,” he recalls), O My Heart is eagerly anticipated by the band’s ever-expanding fan base, as well as by their label, Last Gang Records. “I think it has changed the process to be totally honest. Not in necessarily a bad way, or a way that has let the integrity of songwriting suffer, but you just become more conscious of what you’re putting out into the world and how it might be received. Sometimes I wish that it was less in the forefront of my mind when I’m writing a song, and sometimes I’m happy for it because it makes you think more.”
If Guldemond’s songwriting has become more self-conscious, this was not apparent when the band showcased much of its new material (as well as old favorites) at Maple Tree Square. After a painfully long sound check, Mother Mother took the stage just after 6:30, squinting into the sun as it lowered its way behind the buildings. The crowd was younger than your typical Jazz Fest audience, with a significantly higher concentration of Chuck Taylors and labret piercings. And unlike so many Jazz Fest shows, this performance was clearly about much more than a pleasant-but-innocuous day out with the family. The set began with a pair of new songs and a slowed-down, brooding version of “Touch Up,” the eponymous single from their first album. The new tunes were, as promised, more straightforward and band-oriented, and contained more sonic textures, including a drum pad and buzzy synth lines on title-track “O My Heart.”
As well as their snappy pop songcraft, the band displayed its virtuosic musical talent: Ryan Guldemond took numerous guitar solos, and Debra-Jean Creelman belted out a staggering vocal solo on “Love and Truth.” On several of the new songs, Jeremy Page set aside his bass to add jazzy sax breaks. The band slowly coaxed the typically reserved Vancouver crowd out of its collective shell with a series of late-set barn-burners, including a stomping, electrified take on Touch Up’s “Train of Thought.” The band followed it up with another new song, “Hay Loft,” a frenetic hip-hop-tinged rocker that resulted in the eruption of several pockets of dancing; just in front of me, a pensioner and a young boy began a spontaneous hoedown, apparently unaware of the spectacle.
Mother Mother brought the 90-minute set to a close with a medley of songs from Touch Up, ending on “Ballcap,” a subdued finale to an otherwise rollicking show. Posted: Jun 29, 2008
In this Article Artist(s) Mother Mother Resource(s): Vancouver International Jazz Festival