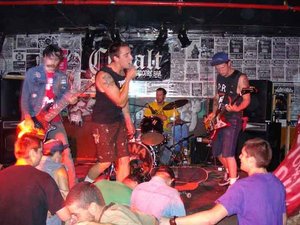 For any of you fiends who've been dwelling inside rocket-proof domes until recently, the China Creeps -who are Neil on bass, Baxter on guitar, Matt on vocals and Dave on drums - are one of the leading (of what is becoming a tradition of) great skate-thrash acts in East Vancouver. On July 4th the Creeps and the local crust authority Massgrave will be supporting Seattle's Skarp, as well as A.N.S. from Texas and the Unwanted out of Manitoba at the Sweatshop (1945 E. Hastings).

Skinny: How often do you guys get together to rehearse?

Neil: Maybe once a week, for maybe an hour, with a half-hour of music.

Baxter: We practice more in the winter.

Dave: With the equiptment being so poor, there's about an hour of technical difficulties and then a half-hour of jamming.

Matt: One hour of smoking, thirty minutes of practice.

Skinny: Where did the name come from?

Baxter: We're the creepiest people who hangout there.

Dave: It's one of the oldest concrete parks in Canada.

Matt: It's probably getting destroyed.

Skinny: How far outside Vancouver have you performed?

Baxter: Seattle, down the Sunshine Coast and Victoria. We're hopefully going on tour this summer.

Dave: In the first week of August we hit Seattle and the Oregon Coast on a ten-day tour.

Skinny: Has anything crazy or terrible happened on the road?

Baxter: In Ucuelet we were doing the Jaks' reunion and Willy Jak says, “yeah there's a drum kit coming, you don't have to worry about it,” and then at nine I said “are the drums here?” and he said, “don't worry, they're on their way,” and the next thing you know it's 1:15am and he says, “I don't think the drums are coming.” So Dave makes a drum-kit with a trashcan lid on a mic stand as a crash cymbal, and the snare drum was two milk crates.

Dave: It was a good crowd so we stayed and ended up being the only band.

Skinny: Tell me about beer-can fights.

Matt: They've been pretty common at our shows. The last time we played the Sweatshop there were a couple hundred cans flying around the room.

Dave: We have to write a song called Beer Battle.

Matt: We had an all-ages show shutdown at Video Inn. We started a can fight and all the other bands got canceled, so we just threw cans all night. They don't allow gigs there anymore because of us.

Skinny: Who did the artwork for the skate deck? Are there still many available?

Dave: There were three pressings, so there's about a hundred of them in all. There were thirty in the last pressing and the rest are sold. It was Donovan from Lady Luck Tattoo in Langley who did the picture for the deck. He knew where we were coming from with the whole 80's skate-rock thing and had a logo done in a couple nights.

Neil: We were accused of stealing the image from some band in Victoria.

MW: Will there be a China Creeps full-length soon or ever?

Neil: Probably not. I think the plan is to put out another 7”.

Dave: Or a split 7”, and there's a couple tracks coming out on the Absolute Underground compilation and on a comp we're releasing. We're also recording a song for a videogame, but not exactly sure what's happening with that right now. Posted: Jun 29, 2008
In this Article Artist(s) China Creeps