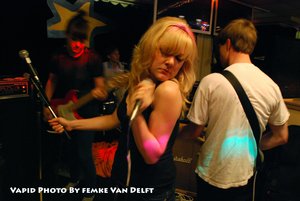 I rolled into Hoko's late, just in time to hear the last of Nu Sensae's soundcheck. There was a pause while they drank a beer, and then they launched into their set of noisey, grungey, livin'-in-dirty-basements sound. For just two people (girl on bass, boy on drums, sharing the vocals), they make a lot of noise. They usually play in places with shitty sound, Hoko's included, but I find the grittiness compliments them. At times, they sounded a bit spooky and eerie, which I like.

Watching a two-piece play is about watching the instruments get pounded really hard to make a full enough sound, and Nu Sensae is no different. They both looked like they were in battle, and we were just spectators to the damage they created. I especially enjoyed the slowed-down Wire cover, which fit in perfectly with their repetoire, and could easily have been mistaken for one of their own if you weren't paying attention. Looking forward to hearing more from these folks in the future.

Vapid played next, freshly home from their tour of Eastern Canada and the USA. They are one of my favorite local bands, I just can't get enough of fast punk-rock-with-lady-vocals. Since they have been back, they are playing really tight as a band. Their songs are faster live now too, which I love. Kaitie's vocals get more snotty and aggressive the faster the songs are played, and the audience responds in kind. This show was really confrontational, the band and the fans competing for space on the floor, all heaving together in the throes of punk rock. I can't get enough of that! They busted an amp in one of the first songs (thrashin’ too hard!), but still blasted their way through their set, though they have sounded better in the past. Vapid finished the set with their hit single, anthem for this summer - “Do the Earthquake.” I'm pretty sure the floors of Hoko's shook with all the dancing this song inspired, or at the very least my drink did! Pay attention to this band!