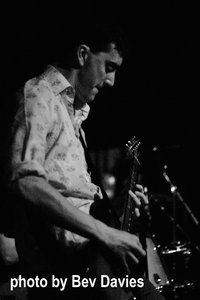 I was in a bit of a funk as I made my way down to the ANZA club, already half-cut and looking to have my shit saved by some good ‘ol rock and roll. And with tonight’s amazing lineup, I was sure to have the icky stuff washed clean away. Showing up at 9:30pm proved to bear no fruit, so I killed some time with raw fish and cheap draft at the sushi spot up the road.
Satiated (and buzzing on beer), I made tracks back to the club in perfect time to chat with openers Hawaiian Bibles before they took the stage to deliver a balls-out wicked set of their brand of fuzzy love-rock. This being my first (and certainly not my last!) time checking these decent cats out live, it was everything I’d hoped it would be. Playing a good portion of their debut album and a couple of tracks I’d never heard before, HB sounded just as good live as they do on CD, probably better - and I’m happy to report that “Don’t Wanna Give It Up” was fucking madballs! And yes, I peed, just a little.
Next up was old-school Vancouver stage-veteran Ford Pier. All things considered, Pier and his one-man guitar show seemed an odd card in this lineup of hard driving punchy indie-rock. But he played his heart out and the crowd seemed responsive. I would say more, but I was schmoozing and just wasn’t feeling it. All respects to Pier; I just needed to rock out.
Okay, now things are getting fuzzy, as I’m pretty lubed up and additionally stoned on the weed, so my recollection gets a bit spotty from here on. But not spotty enough to forget that Bel Riose kicked mucho assholio! I had heard nothing of this local 2-piece before Saturday, but their sweaty, rabid and uber-energetic set left the room in a sticky fervor and created a few more converts than just myself. Well fucking good, boys! I had to switch to water once I found myself swaying and flirting with random objects and people I shouldn’t have been flirting with, trying to sober myself up enough to be reasonably present for the evening’s headliners: the Invasives.
Another long-standing and legendary Vancouver punk band, Invasives came to destroy! You could feel it in the air: the anticipation was electric and the band soaked in it, clearly pleased to be playing to such a devoted audience. After a few tune-up notes, Invasives were off to the races, ripping it up with snotty-kid vocals and ferocious riffs. Yes, I loves me some fast hard music at best, but unfortunately my fatigue kicked in LARGE, and I had to take a powder 3 songs into their set. But I’m certain that they made good as scads of happy fans filled the floor, Cheshire grins plastered on to each and every face as they hopped around with silly abandon. Before I walked out for good, I took a last look and I saw the love in that room (yeah, I’m a hippie: fuck off!) with a lot of people at their happiest. I had to throw a Thank You out there, since I showed up that evening with a blackened heart and left with a new lease on my night, and it’s all because four bands and eight musicians playing a part in a rock-and-roll sermon reminded me how healing music can be. Posted: Jun 17, 2008
In this Article Artist(s) Ford Pier, Bel Riose, Hawaiian Bibles, Invasives Resource(s): The Anza Club