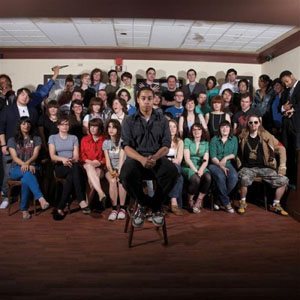 Canada doesn't produce a whole lot of hip-hop in general, let alone the sterile mall haven of Edmonton. As such, the sophomore album from Rollie Pemberton (aka Cadence Weapon) is going to make you wonder why that is. Taking the synth heavy sound of his debut to new heights, Afterparty Babies bumps the wunderkind producer's backpacker flow over a steady diet of ecstasy-fuelled 4/4 beats. It's an album dedicated to the rare hip-house subgenre, but it ain't just some trendy wiseass trying to pick a cute niche. Cadence's dad Teddy is credited with bringing rap to Northern Alberta in the early '80s via a college radio show, so Rollie was fully immersed in the shit since Grandmaster Flash was close to the edge. Lyrically, he's all over the map, name checking Mike Peca, Mark Bolan, Richard D. James, and Sylar from Heroes in rants on tattoos, the state of things, and dissatisfaction with cliquey Friendster friends, while his beats are nothing short of transcendent. That makes this album both an homage to the old school and as knowledgably progressive as can be. Word. Posted: Apr 1, 2008
In this Article Artist(s) Cadence Weapon