THE BUTTLESS CHAPS: A Decade of Rooteus Maximus 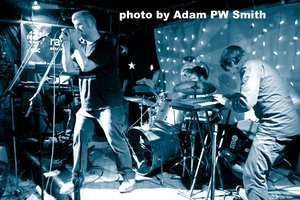 In the ever-changing world of indie-rock, be it Vancouver or elsewhere, it’s a respectable feat to maintain a working band for ten years…and the Buttless Chaps have been doing just that, with no signs of wearing out or slowing down. Cordially helmed by guitarist-vocalist-songwriter Dave Gowans (he of the boyish grin and the impressive silvery mane), the Buttless Chaps have spent the past decade crafting their particular and enjoyably peculiar crossbreeding of new-wave / avant-garde mindset and alternative-country / roots-rocking drive, spanning at least five full-length studio albums and another handful of live compilations.

“The band has kept its core nucleus,” explains Dave in the relative alleyway quiet behind Red Cat Records; said nucleus also contains keyboardist Morgan MacDonald and guitarist Lasse Lutick, who’ve been wing-manning it with Gowans since the Chaps’ beginnings in Victoria BC. “Out of the original four of us who started the band, we have a new drummer in Torben Wilson, and the always-amazing Ida Nilsen…although Ida’s since moved east, she’s still a recording member of the Chaps.”

The Buttless Chaps are working to finish their latest, as-yet-unnamed album by mid-July, to be released on Mint Records in October. Schemes are also being thrown about for Trans-Canada touring before the end of 2008. No plans to hit the States with a heavy rocknroll assault, though: “We’ve toured in the States a bunch of times, but we’ve found it pretty hard to pull it off. We might play South by Southwest next year,” Gowans muses, “and maybe that CMJ thing, but we’ll play it by ear.”

Gowans seems to prefer the character-building Farley Mowat approach to indie-rock touring: “With the collective time the band has now to operate these days, we find it’s really fun to go and play the Canadian cities we’ve hit over the past ten years, and see all our friends across the country. I really enjoy the touring slog of Canada! I enjoy the big, long drives, and the unpredictable weather conditions. It’s the battle of it all that’s enjoyable!”

Gowans has had the unique vantage point of watching Vancouver’s indie scene wax and wane over the past ten years, and has this to say about the experience: “The city’s always had a very strong music community, as a whole. It’s a scene of growth, with a lot of bands working to play together. There are certainly new venues that’ve been popping up lately. We’ve always seen that upswing and downswing, where there’s times when you think ‘oh, all the venues will close and shows won’t happen as much!’ And then, all of a sudden, there are too many shows and too many venues!”

It doesn’t hurt that Gowans (and bandmate Lutick) have recently taken the reins of Red Cat Records. Numbered among the city’s prime indie-music shops, the new proprietors now have an exciting vantage point to crew one of Vancouver’s central artsy hubs and promote local artists – without using the situation to their own advantage; Gowans and Lutick are Good Chaps first and Buttless Chaps second.

“I’ve noticed a really good focus towards Vancouver bands,” Gowans happily notes. “Especially at the record store - we have lots of people, and lots of out-of-towners, coming in and wanting to hear local music and local artists. Lots of Americans listen to the CBC Radio 3 podcasts and want to pick up local music when they come to Vancouver. I think the Vancouver scene is in a really good spot right now.”

The Buttless Chaps will host their 10th Anniversary Concert on Friday April 1st at the Biltmore Cabaret (395 Kingsway). Also playing are the fabulous Parlour Steps and The Fits (Veda Hille and Patsy Klein), which makes this event a grand celebration of determined longevity from the heart of Vancouver’s indie talent pool. “We’ll have some guests joining us onstage at this show,” adds Gowans. “There’s the vocal trio Pan Pan, which isCorben Murdock, Melissa Devost and Lindsay Popes; Lindsay sang on a few songs on our last record. I think Veda’s singing a few with us, and J.P. Carter’s sitting in on trumpet.”

The CBC will be onhand at said Anniversary Concert to document both the Chaps’ and the Steps’ sets for their Concerts On Demand series. Those wishing to add their whoops, cheers, and applause to the recording are urged to attend - no ifs, ands, or Butts about it. Posted: Apr 1, 2008
In this Article Artist(s) The Buttless Chaps