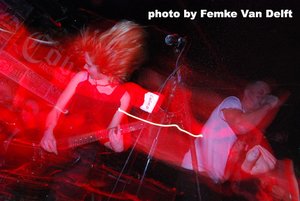 If Vancouver were a jungle and we were all chimps, Todd Serious and Chris Rebel would have their own separate little bands. Chris’ pack would be more violent and smaller, and would conduct raids into Todd’s territory, stealing women and roots. In this scenario, various smaller males would follow and emulate both leaders, and Erin and Stepha would probably just stay home and have baby chimps.

We are, of course, not chimps. Alphas Todd and Chris can get along, having united against a common enemy, and Erin and Stepha can take femalehood into a domain where relatively few lady apes have gone before – the so-called “fraternity” of rock. Sometimes, tho’, I wish I could get Desmond Morris out to one of their gigs, y’know? - to see various audience members, male and female, emulating the behaviour of the “leaders” onstage, Ohhhing along, excitably trying to share stage space, while moshers jostle below in joyous animalistic release, all that good old ape stuff set free in the transpersonal madness of the pit...

Barring a few oldtimers, the Rebel Spell are the only punk band in Vancouver whose leaderly charisma and kickass songwriting never fail to shut down my inner anthropologist and put me in touch with my underlying primate self. Tho’ occasionally their show Friday descended into anarchy (and not of the A-in-the-circle speechifying kind), the packed crowd loved it, the energy was high, and we got to hear their reggae-influenced “They Know” live for the first time ever, Erin sez, complete with a keyboard tucked behind some amps. Afterwards, Todd told me that they band thought the Razorcake interview I did with them (#42) was a hilarious read (yay!), and I picked up this cool DIY DVD called NWPunkrock: 30 Plus Years of Punk Rock in the Northwest, which ends both discs with footage of the band performing. At $10, you can’t go wrong, even if the production values are sub-shitty and some folks interviewed (the Dishrags, the Subhumans) aren’t represented musically. Jon Card steals the show, anyhow. Posted: Apr 1, 2008
In this Article Artist(s) The Rebel Spell Resource(s): The Former Cobalt