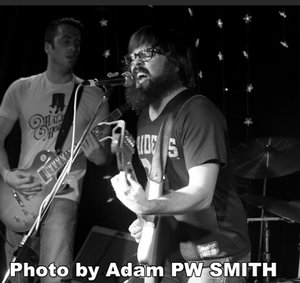 Eazy-E, Bone Thugs, Big Tymers, you name it: the bitches-n-money ghetto-rap is slamming the minute I crack the door. Jordie Dammet, bassist for bar-rock goodboys The Hotel Lobbyists (and sideman for country boozer, Shiloh Lindsey), is boot-knocking' 90's hip hop moves all over the room. The Lobbyists are in party mood, aching to unleash a new EP of groovy, shout-out, grits-n-spits pop-proggy rock-rock on the world. The bed tracks bounce with pleasing rock fury and melodic sing-along charm, BUT - in the moments leading to finalizing this article, disaster strikes. The band's trusty Roland VS-2000 blew the fuck up - 30 hours of recording/mixing effort lost. Shitty deal. But lead guitarist Jordon Isaacs has a plan - potentially wooing former records mainman Murray McDonald (54-40, Tina Turner) to re-record the band. For real. The final product will be called Bitches and Bucks.

Cue chief songsmith/vocalist/guitarist (and relentless shaka-shaka tambourinist) James Wood – aka Jim Legacy (aka "Yeti") - bearing a striking similarity to Teen Wolf: "We talked to a few people and, ah...we may be considering a name change. The concept of Bitches and Bucks was that a stag and a beautiful lab were going to have babies, with all these little puppies suckling off the titties. And between each of the songs we're going to do this nature soundtrack story about this six-pointed retriever that got lost from the herd, named "Chee Chu". I'd be telling the story with like banjos and crickets and stuff."

This is a serious band, right? Jordie concedes that, yeah: "We seem pretty goofy and stuff. Early on, we played a lot of UBC things, and people thought of us like a party band. But if you listen to James' lyrics, there's nothing funny about it." Still, the first album was titled Jurassic Beaver, depicting a rampaging giant beaver gnawing on a T-Rex. They also had an early predilection for wearing matching red bellhop suits. Silliness aside, the band is just as much good-time Canadiana pub-rock of yore (Trooper?), as slow-wrenching Ol' Shaky, tight inside that country-fringin', folky-rootsy-thumpy-backwoods-porch-meets-indie-rock "scene" (silly wildlife T-shirts included) that lords over certain sections of Main St., i.e. The Smokes, No Horses, he Stumbler's Inn...all lovers of the Lobbyists. In fact, Bitches notwithstanding, the new album might be titled Myrfield, after the three enormous Myrfield bros of the Stumbler's Inn. "You don't know how much bro-mantic love we'd get from that," Jordie says. No shit.

The Hotel Lobbyists official beginning was James telling drummer (and old Nanaimo bro) Mike Gurr two years ago: "I wanna form a band." Mike is straight-up, classic rock-worshipping, Bonhamesque. After a rotating cast of dudes, they added Mr. Dammet: "I went to a party at Earl's with a bunch of nurses," the bassist explains "and I'm bored as shit, just getting drunk. And I see at the end of the table this beautiful, glorious, shining-in-the-light BEARD." James! Bro-love at first sight, soon enough the two were piecing together Mr. Wood's newest rag, 'Line Red' - still the Lobbyists' groove epic live trademark.

Jordie and James are bred from the same goofy womb. As for tall, slick lead guitarist Jordon Isaacs, milker of the band's rock benefits: "This guy lives off of vodka, McDonald's cheeseburgers and cocaine," jokes James.

"And vagina," chips Jordie, "the ultimate protein." Isaacs had to endure an audition. "The worst, most awkward thing I've ever done," says Jordie, “It's like having sex for the first time." But Jordon cut the mustard. "We gave him a copy of the CD, and were like, ‘Learn it.’” says James, "And he did. Two days. Didn't even skip a beat!"

A Western Canada mini-tour with Jon McKiel awaits the boys in May. In Fall 2008, The Hotel Lobbyists tackle their first full-fledged, here-to-Newfoundland trip with the mighty Pack A.D. Hopefully, they'll avoid a repeat of James' intimate late-night encounter with Rick Rubin's cousin – (Ed Rubin) in Nanaimo.

Elaborates James with discernible terror: "So I'm sleeping in my bed, right? And things were getting weird, like people were pissing themselves. Anyway, this couple had a bed, and this guy gets up. And he's obviously sleep-walking and he takes a fifteen-minute piss. Fucking guy comes out of the bathroom, crawls in bed with me. It was so confusing. He slipped off his pants, threw his leg over top, and then let out the biggest fucking fart I've ever heard in my entire fucking life."