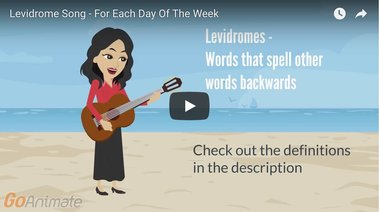 Wednesday Ward will not draw.

A song [by Lola Parks] of levidromes takes the watcher along for a walk through the week.

Songs and poems are among the levidrome challenges issued on social media to start 2018. A levidrome is a word crafted by Victoria boy Levi Budd. After a brief affair with palindromes the second-grader moved on to words that spell a different word backward – think pool and loop. While some call it an emordinlap (palindrome backward) it’s not in the dictionary. Levi, and plenty of folks online, now call that a levidrome.

Levi and his dad Robert Budd, launched his bid to get levidrome in the dictionary a video last fall that rounded the world.

There are a couple new beers named levidrome (a Swedish lager that missed the boat without regal in its name) and even a few people who figure listing levidromes kept family members sane over the holidays.

While Oxford responded to the #levidrome frenzy on Twitter, Webster’s Dictionary has yet to wade in on the word.

Oxford became aware of the campaign through a tweet from famed Canadian actor William Shatner.

“Since then media outlets have picked up on it and have covered the levidrome campaign,” says Oxford editor Rebecca Juganaru in the video.

“Levi there are many new words every year. Some very clever ones and some very useful ones. We don’t add all of these words to our dictionary, we’d never sleep if we did. Instead we only add the words that get used by a lot of people for a long time.”

To get in on the challenge the easy way, visit levidromelist.com/levidrome-list/english for a handy listing of levidromes. Posted: Jan 29, 2018 Originally Published: Jan 17, 2018
In this Article Artist(s) Lola Parks