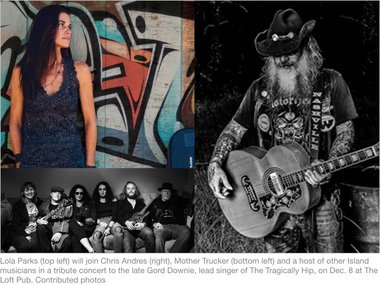 Gord Downie once said: “Music brings people together. So my function in anything I do is to help bring people closer in.”

On Dec. 8 at The Loft Pub in Victoria, artists from across the Island will gather to do just that, performing a tribute concert to The Tragically Hip frontman, who lost his battle with cancer Oct. 17.

“And then when we heard about Gord Downie’s passing, we decided to use our booking for a tribute to Gord instead,” Mighty Speck president James Kasper said. “It’s the Canadian thing to do.”

A roster of local acts including Kasper, Chris Andres, Gord Phillips Band, The Lost Talkers, Mother Trucker, Blake Andison, Nick Taylor, Lion on a Leash, Pon The Rebel, Bill & John Allan and Lola Parks will hit the stage to perform their favourite Hip tunes. Proceeds from the show will benefit Victoria’s Cool Aid Society and the BC Cancer Agency.

“His words were so much about our people, our landscape, our hockey,” Parks says of Downie and the band. “It didn’t pigeon hole them so much as made them.”

Growing up on the Lower Mainland, she says, Hip fans were few and far between. “The Hip are pubs and beer and Ontario,” she laughs.

“But there were summers where you lived off of The Tragically Hip,” says the singer-songwriter, whose memories of teaching her best friend to drive play to the soundtrack of Up To Here.

Parks once entered a CBC poetry contest where the stipulation was writing verse using Hip lyrics, and in 2003 at a show in Montreal, she got to meet the rocker. They chatted about hay fever and allergies, because Downie mentioned his nose was “stuffed up.”

“I think a lot of people have met Gord, he was sort of like our Che [Guevara], he was a man of the people.”

Reflecting on Downie’s influence as she gets set to release her new album The Hustle, Parks says, “I wish I wrote like that, I wish I pulled in Canadiana like that.

“I really think [he’s one of] these cultural, social vessels, that connected us. Some people would call that a poet or an icon.”

The Gord Downie Tribute Concert & Benefit happens Friday, Dec. 8 starting at 8 p.m. Tickets are $10 at the door or in advance at The Loft, 229 Gorge Rd. E.