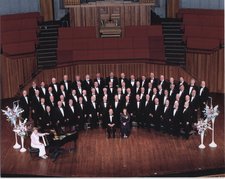 from Victoria BC
http://www.arionchoir.ca
Past Shows (6)

This site is intended to help you find general information about the Arion (pronounced a-RYE-on) Male Voice Choir, information about joining the Choir, how to obtain tickets for our concerts, as well as information on our repertoire, and our music library.

The Choir has sung continually since its founding in 1892, during the reign of Queen Victoria. It predates the British Columbia Parliament Buildings (1897) and the Empress Hotel (1908). It is the oldest continually performing male voice choir in Canada.

The Choir performs numerous concerts each year at venues in Victoria, and elsewhere on Vancouver Island.In the recent past it has performed at such public gatherings as the 100th anniversary of the opening of the Provincial Legislative Building in Victoria, the launching of the Sail and Life Training Society's schooner "Pacific Grace" and the annual Remembrance Day services at the Victoria Cenotaph. Joint concerts have been held with the Vancouver Welsh Mens' Choir, Youth Choir 61, the Crystal Singers (ladies' choir), the Eugene Gleemen, the City of Gardens Chorus (Sweet Adelines) and the Victoria Male Voice Choir.

The Choir also performs charity concerts in Nursing and Retirement Homes, supports the development of young vocal talent in Victoria, British Columbia, and from time-to-time has toured through British Columbia, Oregon, and Wales.
No audio samples have been linked to this profile.
No member roster has been entered (to link to musician profiles.)
Status: Unknown
Submit info on this band to our admins