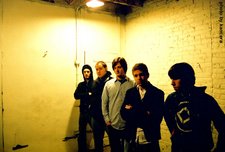 Andy Parmann
andyparmann@yahoo.com
414-429-2345
Contact Info
Formed in early 2004, Amora Savant have been working hard ever since in an effort to rise above the watered-down genre of metalcore that surrounds them and establish themselves as a powerful up-and-coming contender. Using introspective lyrics that are more reminiscent of the true hardcore bands of days gone by and combining them with interludes and transitions of a highly melodic fashion set beside bizarre chord progessions that have a tendency to take on a relentless and bludgeoning rhythmic nature, Amora Savant believes to have found their niche. The raw, natural emotion and fury that emanates from their music and reaches the listener’s ear is sure to pull at heartstrings, as well as, instill a feeling of profound angst.
No audio samples have been linked to this profile.

Status: Unknown
Touring Summer of 2005 with plans to continue touring through 'til next year. - Last confirmed Mar. 24, 2005
Submit info on this band to our admins