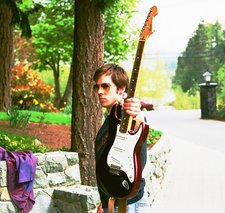 I'm available for solo acoustic shows playing a mix of original and cover songs by bands such as foo fighters, tom petty, beatles, steve miller band, zeppelin, the fray etc. Currently looking for opening act gigs up to an hour's length. Compensation can be discussed. So far i've had much positive feedback and really want to play as much as possible.

I recently moved to Victoria in early summer from Courtenay, BC. I'm in the process of trying to start an original rock band with some covers as well. In the meantime, I'll be performing solo acoustic shows around town in different venues and downtown on certain days. I may have help sometimes but the majority will be just I, playing some old songs, some new songs, and some familiar songs. Looking forward to meeting you all out there!

Still looking to start or join a Rock band as shared Lead Guitarist, and Lead Vocals, possibly shared as well. I would need a bassist, drummer, and another guitarist for starters. I want to start rehearsing and performing in and around Victoria as soon as possible! Check out my website to hear my solo album from last year. It should be a good indication to my Guitar and Vocal abilities as well as my songwriting.