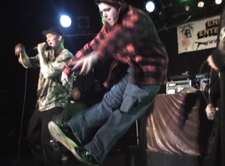 Pocket Kings are: Scram and Saint (born: Alex Miller and Kyle Behan). Two Victoria MC’s who want to spread their message of an honest, working man’s hip-hop. The former baggage “handlers” at Victoria International came together in 2006 and have been developing into one of the city’s finer products. They pride themselves on their exciting live show and producing songs, not tracks.
Coming up in the small Victoria scene has enabled The Kings to “Do-It-For-Themselves” from recording in basements and condos to setting up their own shows for the all-ages crowd. 2008 saw the additions of DJ SpeedyShoes, a veteran of the Victoria club scene, and full-time producer Al Jiggero to round out their sound. Summertime saw Scram and Saint at the co-founding of Outright Cypher, a weekly meeting of local underground rappers, singers, producers & fans. They bring hip-hop to it’s most basic, freestyling in the park. By years end their first album was released. UnNatural Disaster showcases open minded and clenched fist attitudes in both lyrics and beats. The disc features the productions of Al Jiggero, Invisible Think (UK), Part-Time Steve and Scram. Stand out songs “Speak and Listen”, “Self-Schooled” and “Hand in Hand” have quickly become crowd favourites and can be heard on college radio. The duo decided that they would release the album as a free digital download with hard copy release to follow.
The musical collaboration between Scram, Saint & SpeedyShoes flows off the stage. Their live show is one to catch. Scram and Saint have been fortunate enough to share the stage with some notable acts that roll through town, providing support for Hieroglyphics, Blue Scholars, The Clipse and Common Market to name a few.
2009 will see the Pocket Kings contribute to Outright Cypher’s plan to drop a mix tape disc to document the creativity that flows every week. Then Scram and Saint will return to the studio to knock out fresh songs as they prepare their next album.
So, why should you care? Well, they are real. They don’t try to play the hip-hop character. They make music because they can, and they do it for the love of hip-hop. They seek out the new crowd, they reach beyond the flash and the hype that has become associated with the genre. Most of all they want to give you their album.

Status: Unknown
- Last confirmed May. 12, 2011
Submit info on this band to our admins