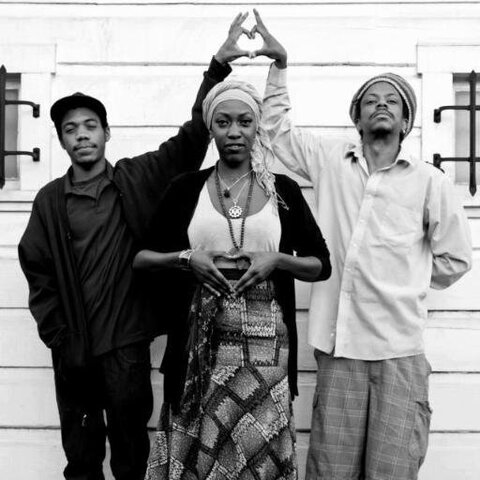 To label The Red Green and Gold Machine as simply “soul”, “reggae”, or “hip-hop” would be a disservice to their vision. Formed in 2010 after a fateful meeting at British Columbia’s Shambhala Festival, the group is anchored by the union of L.A. emcee Dr. Oop (of the bLAckloveR88rs) and Vancouver-based soul vocalist Tonye “Magic T” Aganaba. The group also features unofficial third member, MC Nucleus. The Machine does not focus on fitting a particular genre, but on crafting smooth, lively tunes laden with crisp harmonies and emotive lyricism. That said, it’s clear that reggae has influenced every inch of the group’s music. From the Rasta-nodding band name to the grooves and beats that seem straight out of Kingston, it’s clear that the Machine’s music comes from a place of understanding of love for the scenes it gleefully blends together.

Their debut full-length, Planet Africa, came out in 2014, to a positive reception. Praised for its inspiring spirit of unity and musical appreciation, the record showcased a roots and culture approach to the genres of hip-hop, soul, and world music. Going against the grain of much of the contemporary trends in each of these scenes, The Red Green and Gold Machine is a blessing to those interested in a charismatic return the foundational values of the genre.

View all tracks for this artist (2)
No member roster has been entered (to link to musician profiles.)
Status: Available for Shows/Gigs
- Last confirmed Sep. 10, 2015
Submit info on this band to our admins